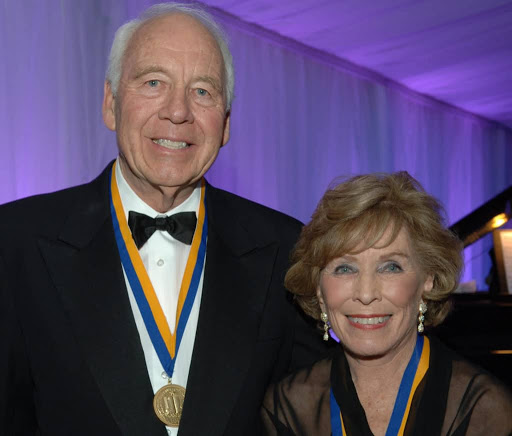 During her many years of service to UCLA, Marion Wilson was president of UCLA Women & Philanthropy and served on boards for the UCLA Foundation, the Alumni Association, the Graduate School of Education & Information Studies, the David Geffen School of Medicine and the UCLA Fund.

In addition, Marion and husband Bob Wilson ’53 have personally endowed student fellowships and scholarships, funded a lounge for UCLA medical students, and made many other financial contributions to units across the campus. Wilson Plaza, at the base of the landmark Janss Steps, was named in their honor in 2000.

In 2006, Chancellor Albert Carnesale presented the Wilsons the University’s highest honor, the UCLA Medal for their leadership in philanthropy and volunteer service to their alma mater.

“Through decades of leadership, service and generosity, Bob and Marion Wilson have created a legacy at UCLA that will further the university’s mission of teaching, research and public service for generations,” Chancellor Albert Carnesale said at the ceremony. “We are deeply grateful to them for all the ways in which they have advanced UCLA and its work. The fact that they are both UCLA graduates makes me especially honored to present them with the UCLA Medal.”

Marion Wilson earned a bachelor’s degree in art from UCLA in 1950. She was a member of the Alpha Gamma Delta sorority, where she served as president in her senior year.

In 2002, the Wilsons were the sixth recipients of the Churchill Bell (first awarded to Sir Winston Churchill in 1947) for their service to Colonial Williamsburg. Marion was also active in such organizations as Childhelp and The Friday Morning Club, and was a lifelong member of the First United Methodist Church of Santa Monica and later of San Diego.