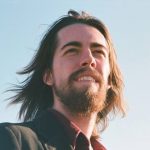 Nick Adams, M.F.A. '17, has exceeded his Kickstarter campaign goal to fund a short film, "Jamie," he is writing and producing.

"Jamie" is the culmination of a four-year process, which started with the award-winning web series "Us," which Adams wrote. The "Us" team came back together for a second season, which launched with the short film "Giselle." "Jamie" tells a standalone story that also functions as a companion film to "Giselle."

A former high school teacher, Adams is currently a Bruins in Entertainment Network board member. For more information about Adams and "Jamie," click here.