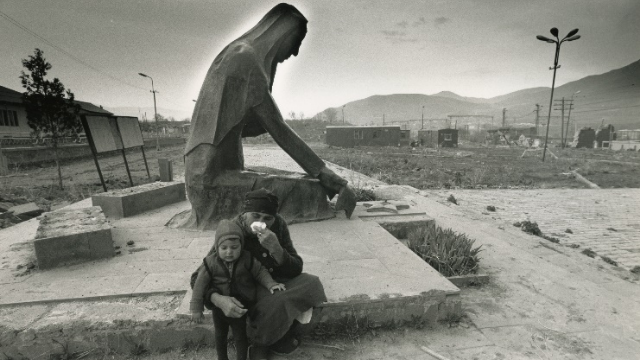 The UCLA Promise Armenian Institute and the Armenian Film Foundation present “Aftermath: the Armenian Earthquake of 1988,” a photo collection by Asadour Guzelian. This webinar is the inaugural event of a new collaboration between the AFF and the PAI entitled the “Armenian Image Archive”. This event is co-sponsored by the UCLA Richard Hovannisian Endowed Chair in Modern Armenian History, the UCLA Library, the National Association for Armenian Studies and Research (NAASR) and the Ararat-Eskijian Museum.

The webinar will include an introduction to the Armenian Image Archive (AIA) by Carla Garapedian, Ph.D., a survey by Joseph Malikian, Ph.D., of early Armenian photography which will be a focus of research in the AIA, and a presentation of Asadour Guzelian’s photographs, taken on his two trips to Armenia in 1988 and 1989.

Asadour Guzelian was born in the United Kingdom and founded what became the Guzelian agency in 1986, after cutting his teeth for eight years with Barry Wilkinson in Bradford. He has supplied news and feature photographs to Britain’s national newspapers. Exhibitions include one-man shows at the National Museum of Photography and the Cornerhouse, Manchester. He has twice won the prestigious Yorkshire TV Photographer of the Year. Guzelian was only three years into his career when he traveled to Armenia to cover the catastrophic earthquake in 1988.