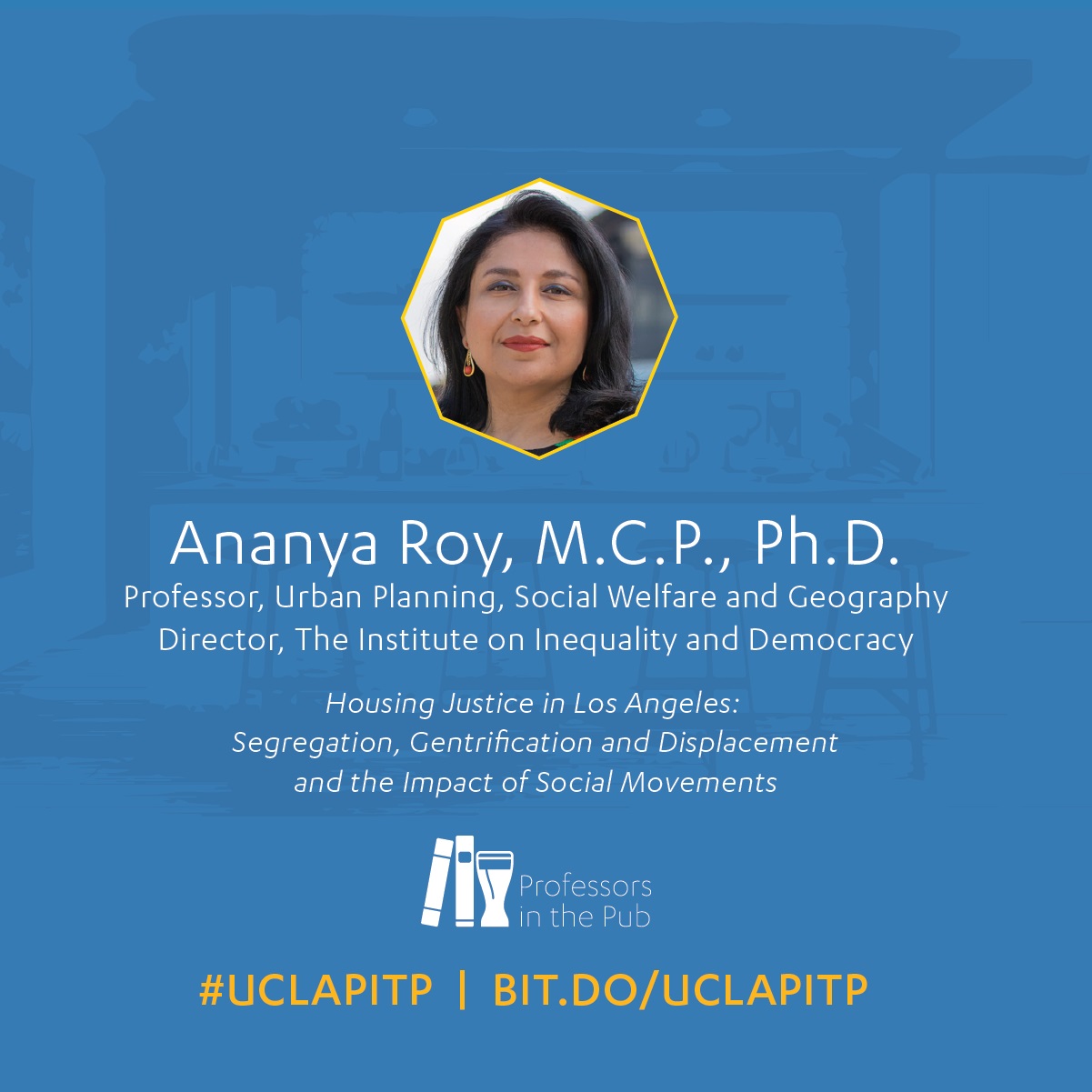 Alumni Networks, Diversity Programs, Students, UCLA Traditions
RSVP Now
Your support helps us strengthen the Bruin community.
Give Now
See all of our Bruin happenings on The Events Calendar.

Diversity Programs brings you a series of one-hour, guided lecture style discussions and performances with distinguished professors on culturally varied subjects. Join us for happy hour during office hours with Dr. Ananya Roy this February as we partner with both the UCLA Latino Alumni Association and the Silicon Beach Network to bring you this special event.

Ananya Roy is Professor of Urban Planning, Social Welfare and Geography and inaugural Director of the Institute on Inequality and Democracy at UCLA Luskin. She holds The Meyer and Renee Luskin Chair in Inequality and Democracy. Previously she was on the faculty at the University of California, Berkeley, where she founded and played a leadership role in several academic programs including those concerned with poverty research and poverty action.

Ananya’s research and scholarship has a determined focus on poverty and inequality and lies in four domains: how the urban poor in cities from Kolkata to Chicago face and fight eviction, foreclosure, and displacement; how global financialization, working in varied realms from microfinance to real-estate speculation, creates new markets in debt and risk; how the efforts to manage and govern the problem of poverty reveal the contradictions and limits of liberal democracy; how economic prosperity and aspiration in the global South is creating new potentialities for programs of human development and social welfare.

Ananya is the recipient of several awards including the Paul Davidoff book award, which recognizes scholarship that advances social justice, for Poverty Capital: Microfinance and the Making of Development (Routledge, 2010); the Distinguished Teaching Award, the highest teaching recognition that the University of California, Berkeley bestows on its faculty; and the Excellence in Achievement award of the Cal Alumni Association, a lifetime achievement award which celebrates her contributions to the University of California and public sphere.

UCLA is a multifaceted, vibrant and dynamic community. Diversity Programs in UCLA Alumni Affairs offers multiple ways to connect students and alumni to one another through our signature programming that supports and connects alumni through culturally relevant topics and interests.These events and programs are not possible without the support of Gold, Life and Blue members of the UCLA Alumni Association. Please consider upgrading your membership to sustain these programs.