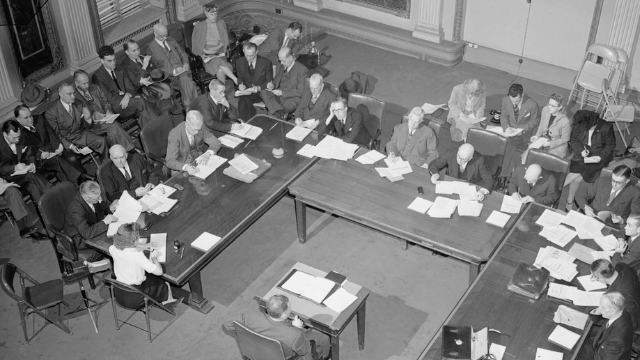 Think this is esoteric, irrelevant? Think again. It is these legal controversies and disputes that lie at the heart of the current Israeli-Palestinian conflict.

During the last decade of the British Mandate for Palestine (1939–1948), Arabs and Jews used the law as a resource to gain leverage against each other and to influence international opinion. The parties invoked "transformational legal framing" to portray the essentially political-religious conflict as a legal dispute involving claims of justice, injustice, and victimization, and giving rise to legal/equitable remedies.

Employing this form of narrative and framing in multiple "trials" during the first 15 years of the Mandate, the parties continued the practice during the last and most crucial decade of the Mandate. The term "trial" provides an appropriate typology for understanding the adversarial proceedings during those years in which judges, lawyers, witnesses, cross-examination, and legal argumentation played a key role in the conflict. The four trials between 1939 and 1947 produced three different outcomes: the one-state solution in favor of the Palestinian Arabs, the no-state solution, and the two-state solution embodied in the United Nations November 1947 partition resolution, culminating in Israel's independence in May 1948.

This study analyses the role of the law during the last decade of the British Mandate for Palestine, making an essential contribution to the literature on lawfare, framing and narrative, and the Arab-Israeli Conflict.

Join us for a discussion with Professor Steve Zipperstein, author of Zionism, Palestinian Nationalism and the Law, 1939-1948, followed by an audience Q&A moderated by CMED Director, Professor Steven L. Spiegel.