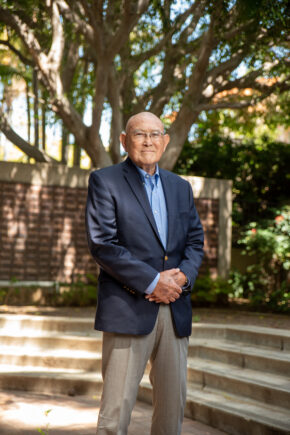 The 2022 UCLA Award for Professional Achievement belongs to The Hon. A. Wallace Tashima ’58, a trailblazing judge with a half century of public service and leadership. He has been an inspiration to Asian Americans in the legal profession and to all who admire his integrity and dedication to upholding the principles of justice.

Judge Tashima is a Nikkei (second generation) Japanese American. During WWII, he spent three years of his childhood in Poston internment camp. After the war, he attended school in Los Angeles and then served as a sergeant in the U.S. Marine Corps. He attended UCLA with support from the G.I. Bill, receiving a bachelor’s degree in political science. He overcame remarkable barriers to attend Harvard Law School, where he was one of only four Asian American students. In Boston, he observed a trial in the U.S. District Court and was inspired to become a federal judge.

Following law school, Tashima served as the deputy attorney general for the State of California, and worked for Amstar Corporation before joining a private law firm. In 1980, he was nominated by President Jimmy Carter to the Central District of California Court. President Clinton elevated him to the U.S. Court of Appeals for the Ninth Circuit, which covers the nine western states. Tashima is the third Asian American and first Japanese American to be appointed to a U.S. Court of Appeals. He assumed senior status in 2004 and continues to hear cases. The experience of being interned during WWII shaped his understanding of the mission of federal courts — to hold the government to its constitutional obligations.

In 2019, the UCLA School of Law celebrated the trailblazing jurist’s half century of public service and leadership with a daylong symposium featuring present and former clerks and colleagues discussing his career and influence. He has been a mentor and role model to many, and with his support, former law clerks and colleagues, including many graduates of UCLA School of Law, have gone on to careers as influential lawyers and judges. Tashima has been awarded Trial Jurist of the Year by the Los Angeles County Bar Association and is a former member of the U.S. Judicial Conference Committee on the Rules of Practice and Procedure.