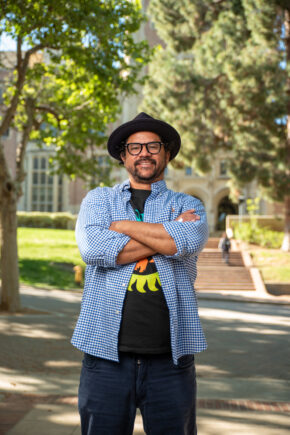 The 2022 UCLA Award for Community Service is presented to Alberto Retana ʼ09 for his dedication to the True Bruin values of respect, integrity, service and excellence. Retana’s mission is to bring about social, economic and racial justice through community organizing, movement building and policy change.

Retana’s core values center on the idea that love and compassion matched with strategy and vision have the potential to transform society. He graduated with a bachelor's degree in political science from UCLA, where he joined campus organizations that advocated for social change, serving as external vice president, affirmative action coalition for MEChA and as a member of the U.S. Student Association.

His professional career began at Community Coalition in South Los Angeles, an organization that empowers communities to develop policy to advance racial justice, economic justice, and food justice and education equity. He worked for the Obama administration in the U.S. Department of Education as director of community outreach, where he organized the Department’s first National Youth Summit, advocating for students who need support to succeed.

Retana returned to Community Coalition to lead a mass civic engagement event to organize 40,000 Black and Latino voters. As president and CEO, he has been a principal architect of innovative solutions to build community engagement helping to launch PowerFest, South L.A.’s premier political concert; the political forum People Power Convention; and 100 Dinners on Race to curate radical conversations on race and racism in Los Angeles, which prompted the creation of the L.A. Office of Racial Equity.

A pioneer in driving equity-focused policy, Retana has positively impacted the lives of thousands of Angelenos in ensuring that marginalized communities are centered and empowered in shaping their own realities. For his work, Retana has received numerous accolades including L.A.'s 500 Most Influential People, ACLU’s Educational Equity Award, Durfee Foundation Sabbatical Award and the 2017 Frontline Soldiers Awards Wall of Fame. He has said “I love seeing people transform, not just because they can change the world, but actually do it themselves.”