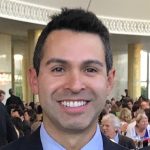 Carlos Dominguez '01, a deputy attorney general at the California Department of Justice, received the California Attorney General award for his significant contributions to the community. He also was honored as "Volunteer of the Year" by the Los Angeles County Board of Supervisors for his pro bono work with the Domestic Violence Project at the Los Angeles County Bar Association.

Dominguez earned his B.A. in psychology; he received his J.D. from the University of Southern Califonia in 2005.