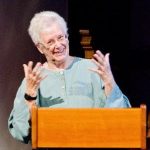 Taking readers into the rural hinterlands of the rapidly urbanizing societies of the United States, Canada, Great Britain, and the Netherlands, the essays in "Women in Agriculture" tell the stories of a cadre of professional women who acted to bridge the growing rift between those who grew food and those who only consumed it. The contributors examine how rural women’s expertise was disseminated and how it was received. Through these essays and the women profiled, readers get an updated and expanded look at rural women’s roles in shaping their communities and the broader society.

“Diverse in its scope and ambitious in its reach, the book will be useful to a wide variety of scholars in fields as diverse as history, women’s studies, and family and consumer science,” said Pamela Riney-Kehrberg, professor and chair of the history department at Iowa State University.

"Women in Agriculture" is available for sale at bookstores or directly from the University of Iowa Press at 800-621-2736 or uipress.uiowa.edu.  Customers in the United Kingdom, Europe, the Middle East, or Africa may order from the Eurospan Group at eurospanbookstore.com.