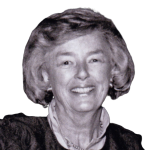 Patricia Thompson met the love of her life, Bob Thomas, in 1947 at the UCLA Daily Bruin newspaper, where they were both columnists. Bob went on to become a Hollywood writer at the Associated Press and was the author of many celebrity biographies, while Patricia went back to UCLA for a master’s in history, specializing in ancient Greek and Roman history and then enjoyed being an instructor as a teaching assistant at UCLA for eight years.

She also served many years advocating for hospital quality assurance on the UCLA Medical Center Board, where she was often the only female member. In later years, Thomas was a founding member of Las Donas, a UCLA support group, supervising publication of walking tours of UCLA; became an advisory trustee to the board of the UCLA Foundation; and was elected vice president of the UCLA Alumni Association board. A Life Member of the Alumni Association and a generous supporter of her alma mater, Thomas was the recipient of the University Service Award in 1976.

Thomas served as an Officer for the Van Nuys-Sherman Oaks-Encino Coordinating Council, a non-profit civic organization of groups working on juvenile protection and health services; and was adviser on the budget committee for the United Way.

Appointed to the Citizens’ Advisory Commission for the XXIIIrd Olympiad in Los Angeles in 1984, Thomas was a great aficionado of the Olympic Games and was also a fan of many spectator sports, such as basketball (she traveled with the UCLA Bruins in the Lew Alcindor-John Wooden days) and tennis (Roger Federer was her favorite player).

Thomas was an avid reader, took many UCLA extension courses, was an accomplished tennis player, enjoyed vacations at their second home in Dana Point and in Hawaii as well as traveling to exotic places such as Kenya, Japan, Egypt and Tahiti to take professional photographs at Hollywood film locations and international film festivals. She championed women’s rights and was very proud of the accomplishments of her three daughters, Nancy, Janet and Caroline, who survive her. Also surviving her are grandsons Matthew Goff, Ryan McGowan and Tristan McGowan as well as sons-in-law Kevin Goff and James McGowan.