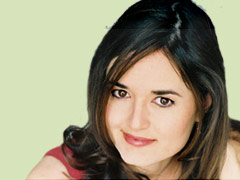 Actress Danica McKellar ’98 (The West Wing, The Wonder Years) recently spoke with “College Flashback” by U.S. News & World Report. She discussed her days as a student at UCLA, where she was inspired by her classmates' love of learning and blossomed as a math wiz.

How/why did you choose your major?

Loved math classes. I was going to be a film major but then took a calculus class, finished the top of my class, and was hooked! For a while I thought about doing a double major but then realized that I could always go back and study filmmaking, and that now was the time to really focus and experience mathematics. I love "thinking" and I loved studying math!

Do you keep in touch with any of your college friends?

Yes! One of them just had a baby, in fact!

What was your favorite hangout spot?

The Sculpture Garden, and my favorite place to study was the graduate lounge in the math building. Somehow I got a key even though I was an undergraduate! I actually still have the key. I think I always figured I'd come back. Not yet, but you never know ...

Were you a bookworm or a slacker?

Bookworm — at my sorority I was the head of the study group program.

Who was your role model when you were in college?

Jodie Foster — a successful scholar who also was a great actress/director and someone who started acting from a young age.

What was the biggest obstacle you overcame in college?

(I was a calculus tutor for two years in the department). Sure enough, it happened. And in fact, when I was at Sundance in 2003, I got to a party that had a HUGE line, filled with all sorts of celebrities. It didn't seem to matter — no one was getting in. Then the bouncer spotted me and pulled me over. He said, "Hey, youu're the reason I passed Math 32B — get your friend and come on in!" That was pretty darn cool.

Tell us about one thing you did in college that still makes you proud.

Besides the tutoring? Co-authoring original research with colleague Brandy Winn and Prof. L. Chayes. It's titled, "Percolation and Gibbs States Multiplicity for Ferromagnetic Ashkin-Teller Models in Z2." But now it's referred to as the "Chayes-McKellar-Winn Theorem." The full paper can be found at www.danicamckellar.com.

What did you like most and least about your school?

The most: The love of knowledge that permeates the math department. People just stop in the hallways to discuss interesting math problems ... lots of professors in a cloud of imagination and thought, wandering around with glassy looks in their eyes, always ready to have their brains expanded with a new way of looking at things. Academia seems unhampered, in many ways, by the politics of corporate America. It was blissful.

The least: UCLA is so big that some of the classes (not the math ones) seemed impersonal.

Tell us one way in which college changed you.

It gave me a chance to reinvent myself, and to value myself for something other than being on television.

If you could go back, what about college would you do differently?

I can't think of anything. I got very lucky with great teachers and wonderful classmates like Brandy!

Did you get in?

Danica McKellar '98 first lit up TV screens at age 13, playing love interest Winnie to Fred Savage's Kevin on the Emmy-winning show The Wonder Years. Over the ensuing 17 years, Danica has avoided the child-star curse and beefed up her résumé in impressive – and unexpected – ways.

When The Wonder Years series ended, McKellar opted to put her acting career on hold and focus on college, enrolling at UCLA with her goals set on majoring in film. But first, she had some general courses to complete – like math.

“I did really well and had a lot of fun doing it,” she said in a UCLA Magazine story published in fall 2004. “I had professors encouraging me to major in it.”

So McKellar put film on hold while she explored her interests in math. Then a professor, Lincoln Chayes, challenged her and fellow student Brandy Winn '98 to try researching mathematics. With guidance from Chayes and a lot of long hours, the two proved a theorem and saw it published in the prestigious Journal of Physics A: Mathematical and General.

In the 2004-05 television season, she was seen on Eve, NCIS, Jack and Bobby and NYPD Blue. She also found herself landing first on the most popular Web searches list.

Still, she hasn't left education and math entirely behind. She discussed some smelly science in the Web comic Captain RibMan and is spokesperson for Figure This!, a government-sponsored site that features math challenges for kids.