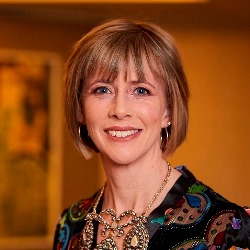 In popular culture, the term “butterfly effect” refers to the way seemingly small, insignificant occurrences can bring about – or exert great influence over – ostensibly unrelated events. The name derives from a mathematical model of weather that showed a tiny change in initial conditions (like a butterfly flapping its wings) can have a huge impact on the final outcome (like the formation of a hurricane).

Edie Lush ’92 has experienced this phenomenon a few times in her life – and it has carried her from UCLA, where she was an Alumni Scholar, to the United Kingdom and all over the world. Her journey recently took her to the United Nations, where she received a Media for Social Impact Leadership Council award for her work on the Global Goals podcast. A journalist, communications skills trainer and event master of ceremonies, Lush has used all of those abilities to co-create and co-host the podcast, which uses as its framework the Sustainable Development Goals, a collection of 17 global goals set by the United Nations General Assembly in 2015.

It was an off-hand suggestion by a colleague that set her on the path to UN acclaim. Long before that, it was a particularly interesting class at UCLA that sent her life on the track it’s taken. The Bay Area native – now a dual U.S./British citizen – reminisced recently about her undergraduate days and how they shaped her subsequent life and career. She reflected on the beginnings of her podcast and how it can help empower each of us to contribute in our own way to causes that are important to us.

“I was pre-med when I started, but I really loved politics and I loved, especially, different ways of examining global power. Did people make a difference or was it really state-based?

“I took a class with Arthur Stein on international relations theory, and I remember writing about nationalism – it was a time when nationalism was kind of tearing the USSR apart – and everything that happened as a result of that. I remember doing that class with him and how I totally loved it. I absolutely found my love of political science at UCLA.”

Having found her calling, Lush wound up majoring in political science, with a specialty in international relations, and then earned her master’s degree in international relations at Yale. After graduating, she went to the Organization of American States as a speechwriter for the secretary general and then worked at a hedge fund as a political analyst.

“That was just at the time of the European monetary union. It was literally like a political science class, except I was getting paid for it. I did the same thing at UBS (investment banking): I was a political analyst sitting on the currency trading floor and I ended up looking primarily at emerging markets. It was something a political analyst, a political science geek, could really sink her teeth into. But it was also where I learned that I loved being a journalist because what I really loved was going and talking to people, finding out what was going on and then presenting that as a story.”

Pursuing her newfound love of journalism, Lush eventually worked for Bloomberg TV, covering politics and economics. She was on the air 14 straight hours on 9/11. She also worked for the BBC, The Spectator, Prospect, The Week and Spectator Business magazines.

Lush is currently executive editor of Hub Culture, “a social network with physical space. We set up in important moments in time, such as the in Davos during the World Economic Forum, climate summits, the UN general assembly, etc. I’ve conducted thousands of interviews in this role.”

One of those interviews, and a casual remark by a colleague, led to the podcast for which Lush has been honored. “This will be my tenth year going to Davos and reporting from there,” she said. “Nearly two years ago, I interviewed a woman named Claudia Romo Gonzalez (now Claudio Romo Edelman). Stan Stalnaker, the founder of Hub Culture, said to me, ‘You two should do a podcast together.’ I’d literally just met this woman, but I liked her. Her expertise is in solving extreme poverty and communicating gender equality, and she has years of experience working for the United Nations. My expertise as a journalist is trying to communicate complicated stories in an interesting way. We just liked each other and found we worked together really well.”

The first season of Global GoalsCast launched in January 2018 and has covered topics such as educating girls in developing countries, climate change and modern slavery. Despite the sometimes dire nature of the issues addressed, by focusing on goals and how to achieve them, the tone of the podcast is positive and hopeful.

“There’s actually a lot of good in this world, and that’s what we’re trying to show,” Lush said. “We’ve made enormous progress in eliminating people from extreme poverty and getting girls educated – we’ve actually done really well, despite the fact that there is still some way to go, and there are still challenges out there. There are so many good stories and so many good people out there doing really incredible things. That’s what the podcast is really about – finding champions and telling their stories, whether they’re girls that cross the Rio Grande and become software engineers at Google, or Kenyan entrepreneurs trying to solve the problems of harvests.

“What Claudia and I are both really passionate about is giving people facts – at the end of every episode we give people three facts that they can take away and then three actions they can take, because I think a lot of us are prone to thinking, ‘it’s such a big problem; I’m not sure what I can do.’ So we try to give you things that you can do. For example, it makes a difference if you walk through the revolving door instead of that (conventional) door next to it that lets all the heat out when it’s opened. That’s a really easy thing to do – use that revolving door; don’t use that door on the side.

Can butterfly wings cause hurricanes? Whatever the answer, Edie Lush has experienced this effect in her life and career, and thus, made it a theme of her podcast: little things can make a big difference.