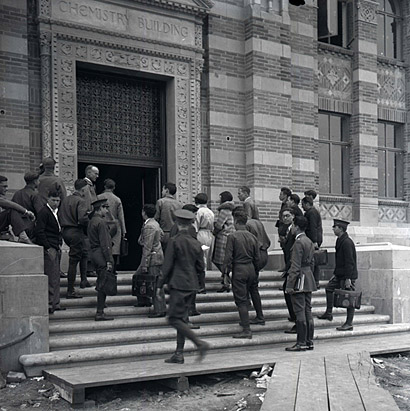 The 125 students enrolled in Professor Hosmer W. Stone’s Chemistry 1A course were in a class by themselves – literally. The class, which met for the first time at 8 a.m. on March 18, 1929, was the first to receive instruction at UCLA’s new Westwood campus – months before its official opening.

A mysterious fire had forced the early use of the new Chemistry Building (now Haines Hall) – even though only 60% of the building had been completed – and remains one of UCLA’s unsolved mysteries.

At 2:42 a.m. on Jan. 3, 1929, two students living across the street from UCLA’s Vermont Avenue campus were startled by a small explosion and subsequently found California Hall, which housed the chemistry laboratories, on fire. By the time firemen arrived, the blaze was out of control, aided by the highly combustible chemicals in the building. By dawn, California Hall was nothing more than charred embers.

The cause was not immediately clear to authorities. A chemical fire was one theory. But since a velvet curtain in Millspaugh Hall auditorium was found ablaze at approximately the same time, investigators decided arson was the likely cause of both incidents.

California Hall was a two-story wooden structure built in 1917 as barracks for the Student Army Training Corps. Chemistry instruction and labs were moved into the building after constant complaints about foul odors and corrosive fumes from the other Science Building tenants – including the biology department. 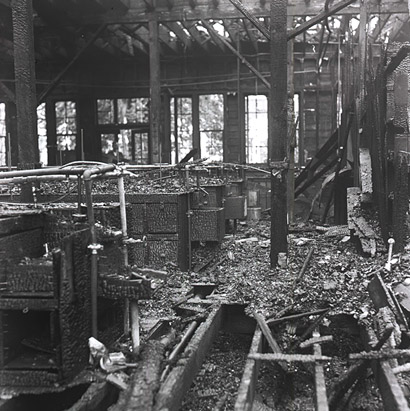 UCLA Director Ernest Carroll Moore telegraphed the news of the destruction to University of California President William W. Campbell, and measures were urgently put in place to replace all lost materials and push forward the construction of the Chemistry Building at the new Westwood campus.

No one seemed to mind the loss of the antiquated building. The Daily Bruin ran a tongue-in-cheek story that began: “ ‘Cal’ Hall – the bugaboo of the campus – the butt of many a college wise crack – no longer torments the U.C.L.A. campus.”

“Everyone said that some day ‘Cal’ Hall would burn down,” the article continued, “and finally “California” Hall gave up the struggle and submitted to the universal opinion.”

Jokes and rumors as to the cause of the fire abounded. Some campus wits placed blame on USC pranksters. Others joshed that Chemistry Department Chair William C. Morgan found a convenient way to get an emergency appropriation for new supplies and speed up the move to the larger, modernized building at Westwood. Even the characteristically stern chairman couldn’t help but quip about the matter.

“That old barracks should have burned down long ago,” Morgan reportedly said the morning after the fire. “And wouldn’t you know it – when it did, all the witnesses were looking the other way.”

Top image: Students enter the newly constructed Chemistry Building (now Haines Hall) at the Westwood campus on March 18, 1929. A chemistry class had the honor of christening the campus after a fire destroyed the laboratories at UCLA's Vermont Avenue campus.

Bottom image: California Hall on the Vermont Avenue campus lies in ruins after an unexplained blaze broke out in the early morning hours of Jan. 3, 1929. Rather than rebuilding from the ashes, plans were pushed forward to have the Chemistry Building on the Westwood campus ready for classes by March – six months before the campus' official opening.