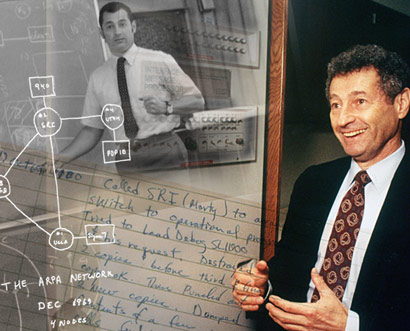 A Crash into the Future

Inauspicious, perhaps, but then an infant's first word generally is. Besides, no one on Professor Leonard Kleinrock's 40-person team suspected that they were starting a revolution of global proportions on Oct. 29, 1969.

That was the day Kleinrock and a student assistant, Charley Kline ’70, M.S. ’71, Ph.D. ’80 sent the first “host-to-host” message over ARPANET (Advanced Research Projects Agency Network), the precursor to today's Internet.

Programmers at UCLA — officially the first node on the network — were attempting to logon to the Stanford Research Institute (SRI) Host. The UCLA team was attempting to send the message “log” over the system to SRI. The first two letters made it, but the connection crashed before the “g” arrived. The second attempt at logging on worked.

Though the team hadn't guessed at the social and business implications its work would eventually have, members realized that something extraordinary had happened at UCLA.

"As of now,” Kleinrock said at the time, “computer networks are still in their infancy. But as they grow up and become more sophisticated, we will probably see the spread of 'computer utilities' which, like present electric and telephone utilities, will service individual homes and offices across the country."

Image: Professor Leonard Kleinrock guided the UCLA team that sent the first “host-to-host” message. The record above is a sketch of how the ARPA Network functioned along with an excerpt from the IMP Log that the UCLA kept. Kleinrock was supervising student programmer Charley Kline on Oct. 29, 1969, when they set up a message transmission to go from the UCLA SDS Sigma 7 Host computer to the Stanford Research Institute's SDS 940 Host computer.