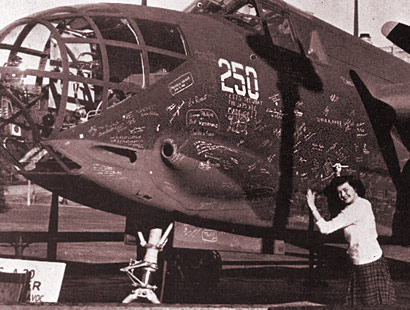 One year after Japan attacked Pearl Harbor, USC-UCLA football organizers marked the anniversary by turning the annual crosstown grudge match into a million dollar war bond drive. The two schools would compete against each other to sell bonds along with game tickets and raise money to support the war effort.

Bruin fans wanting tickets to the Dec. 12, 1942 game received a letter from head football Coach Babe Horrell urging them to purchase the war bonds and a blank bond application. Bonds were $18.75 each, but a $5,000 investment would win fans free seats on the sidelines with their team.

The student War Savings Committee chaired by Tom Papich ’43 marshaled star power and organized campus events to help the Bruins best the Trojans in fundraising. In the week leading up to the big game, defense stamps were the currency of the day. They earned students the right to catch popular band leader Freddy Martin at the All-U Sing, autograph the Douglas bomber A-20 on display, see a two-man Japanese submarine captured in the Pearl Harbor attack and dance the night away to the sounds of Rudy Vallee and his Coast Guard Ensemble (comprising members of the day’s most popular big bands). 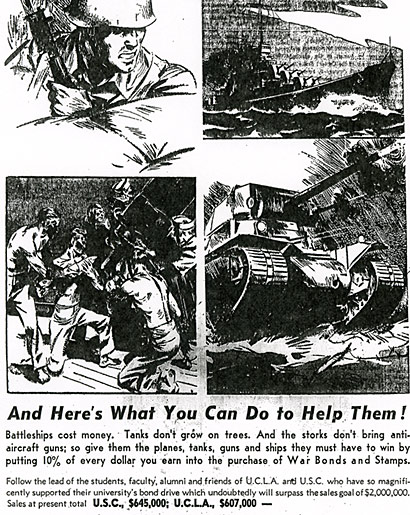 The effort reached a climax on game day. During half-time, 80 Army and Navy ROTC students accompanied 80 female students to work the crowd of 80,000 and sell more bonds. All-Americans Kenny Washington ’41 and Morley Drury raffled off the ball used for the kickoff, while comedian and Bruin fan Joe E. Brown raffled off the game football. Bruin and Trojan card stunts plugged sales while the marching bands spelled bond slogans on the field and, according to the Daily Bruin, “blew their horns right in ‘Der Fuehrer’s Face’” (a reference to a then-popular patriotic parody song by Spike Jones and his City Slickers).

The Bruins won the day, 14-7, beating the Trojans for the first time and taking the Victory Bell home on their way to a first-ever season-ending Rose Bowl appearance.

The Daily Bruin didn’t reveal which school finally won the war bond drive, but it did report that after all receipts were tallied, the united efforts of the rivals resulted in $2,097,000 for the war effort.

Top image: UCLA students, like Alvira McCarthy ’44, anxious to help raise funds for the war effort could pay 25 cents to autograph a Douglas bomber A-20 displayed on campus between the men’s and women's gyms.

Bottom image: An advertisement in the Daily Bruin the day before the big game encouraged fans to: “Stay behind the team but above all else stay behind your country.”