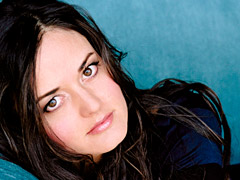 Danica McKellar completely avoided the child actor curse, proving every day that she does not fit any stereotype. She is now a successful adult actress, author and mathematician.

McKellar began her acting career as a child, first appearing in a commercial in 1982. She appeared on the Twilight Zone in 1985, but it was at age 12 that she vaulted to television fame as Winnie Cooper on The Wonder Years.

When McKellar entered UCLA, her math skills began to eclipse her previous fame. She tutored in calculus and was the head of the study group program of her Alpha Delta Pi sorority. She continued acting with the Shakespeare group.

In 1998 McKellar made mathematical history. Under the guidance of professor Lincoln Chayes, McKellar and fellow student Brandy Winn proved a groundbreaking physics theorem, now called the Chayes-McKellar-Winn Theorem. Their work was published in the prestigious Journal of Physics A: Mathematical and General.

In 1999, after earning her bachelor’s degree, McKellar returned to acting, starring as Elsie Snuffin in the fourth season of The West Wing. McKellar wrote, directed and produced her short Speechless with John Milton Branton, which won the Slate Award for Best Short at the California Independent Film Festival in 2002. In 2004, McKellar wrote, directed and executive produced another independent film, Talking in Your Sleep.

She continued her acting career, joining former co-star Fred Savage for a guest role on his TV series Working. She also appeared on How I Met Your Mother, The Big Bang Theory, Eve, NCIS, Jack and Bobby, NYPD Blue, and Heatstroke.

McKellar is an accomplished voice actress, lending her voice to the shows King of the Hill and Static Shock as well as three video games. She also appeared as herself on VH1’s I Love the New Millennium and was the math correspondent for Brink, a Science Channel show about new technology.

McKellar continues to make strides in mathematics. She is a spokesperson for Figure This!, a government-sponsored site that features math challenges for kids. She also authored three math books, two of which were New York Times best sellers, Math Doesn’t Suck (2007) and Kiss My Math (2008).