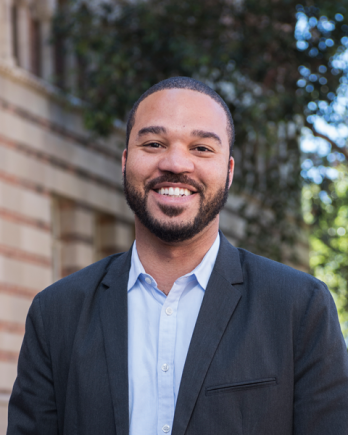 Dr. D’Artagnan Scorza is the recipient of the 2016 Recent Graduate Achievement Award. In a relatively short period of time, his academic and teaching accomplishments, and his exceptional service to the UC and the Los Angeles community can already be considered achievements of a lifetime.

A native son of Inglewood Dr. Scorza graduated from Morningside High School and is a decorated US Navy veteran, having served in the Iraq-War, soon after September 11th. He helped establish a naval operations unit, managing 250 Navy personnel and an operation budget supporting service members traveling in and out of hostile zones.

In 2007 he concurrently earned two bachelor’s degrees: a B.S. in liberal studies from National University and a B.A. in the study of religion at UCLA, where he went on to earn his Ph.D. in education in 2013. He developed curriculum culturally relevant for African-American male youth and worked to reduce recidivism, imprisonment and death rates in the community. He was appointed as a representative on the Chancellor’s Enrollment Advisory Committee, served as a participant in the Alliance for Equal Opportunity in Education (AEOE) and the UCLA Task Force on African American Enrollment which helped to increase enrollment from 96 African-American students in 2006 to 213 in 2007.

A Cota-Robles Fellowship recipient, Dr. Scorza was selected to be the UC Student Regent from 2007-2009. In that role, he was an outspoken advocate for equity and inclusion, affordability and access for future generations of students. He passed policies that helped expand access to education for African-American and Latino youth, established veteran’s service centers and prioritized $160 million for student services. His emphasis on clean energy and sustainable practices supported the university’s policies on being climate friendly. He was also a strong supporter of academic preparation programs for grade levels P-16 and believes they help create a level playing field.

Dr. Scorza is a community organizer with extensive program development and policy experience. He was 2010 Education Pioneers Fellow and a 2013-2014 Business Alliance for Local Living Economies Fellow, which gave him the opportunity to expand his expertise in socially responsible economic development. He is the Founder and Executive Director of the Social Justice Learning Institute (SJLI) in Inglewood, which engages in grassroots policy efforts to support the success of boys and men of color, health equity and local economic development. At SJLI, Dr. Scorza leads a team that works to close disparities in education, expand business opportunities and help youth of color go to college.

He was elected to the Inglewood Unified School District Board in 2015. He chaired the Measure GG campaign for the Inglewood School District, powered by concerned local residents, to secure $90 million in school improvement bonds to update facilities and expand access to a safe, healthy and quality education.

Among Scorza’s other community involvements, he serves on the Los Angeles and California Food Policy Councils; he’s engaged in grassroots policy efforts through the Healthy and Sustainable Inglewood Collaborative; and he is the spokesperson for the Citizens for Revitalizing the City of Champions Revitalization Initiative.

For most up-to-date information, visit http://www.dartagnanscorza.com.