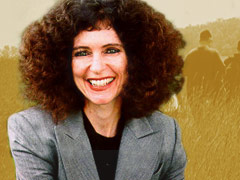 You arrive early for a Joan Waugh class. The seats fill - all of them. A sense of eager anticipation is in the air; a series of visuals appear on screen, accompanied by appropriate sound effects - perhaps a steam engine or a song of the period. Having set the scene, Waugh's lecture begins and the visuals shift to reinforce the discussion. Yes, it is a carefully planned performance, but it comes across as natural and unforced, the technical artifice not an end in itself, but a means to bring home the points of importance, complementing the material but not distracting from it. Students are attentive, there is no idle chatter, the audience is captivated.

Waugh's brilliant use of a multimedia approach blending stills, film clips, videos, music and natural sound, the props - Civil War re-enactors in uniform; the “hardtack” (a baked water and flour cracker) she hands out for students to sample what the soldiers ate, along with the accompanying websites, illustrate why she was not only last year's recipient of the UCLA Award for Innovation in Teaching with Technology, but a recipient of this year's Alumni Association Distinguished Teaching Award.

Along with her renowned courses, “The Civil War Era” and its sequel, “The Gilded Age,” Waugh conducts summer study trips to Gettysburg. There are “field trips” and there are “field trips”: the Gettysburg trip consists of a four-week seminar to prepare the students, followed by two exhausting but exhilarating weeks living at Gettysburg where they scramble around battlefields and historic sites, meet Civil War scholars, and conduct archival research. U.S. Army First Lieutenant Erik Lewis sent a letter from his current post in Mosul, Iraq, noting that he was so determined to go on the Waugh's Gettysburg study tour that he delayed his army tour in order to participate, even though it cost him seniority.

Waugh has authored essays, articles and a book on the Civil War era. Recently, she was interviewed for a documentary on “Cold Mountain - the novel, the movie and the history”, one of many such appearances in recent years.