2020 Young Alumnus of the Year 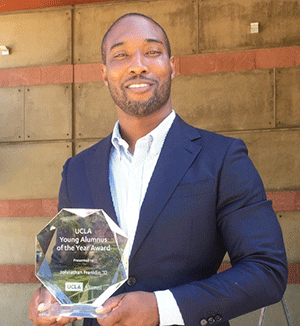 Johnathan Franklin is the 2020 Young Alumnus of the Year. Franklin is a UCLA football legend who was drafted by the NFL. Sidelined by injury, his dream became a series of challenges. Unwilling to give up, Franklin returned home to Los Angeles where he inspires young people to pursue dreams of their own. Affectionately known to Bruin fans as “The Mayor,” he represents the best of UCLA.

A native of South Los Angeles, Franklin was a standout scholar and athlete at Dorsey High School. Awarded an athletic scholarship to UCLA, he established himself as one of the top college running backs in the nation from 2009-2012. Franklin still leads the Bruins in all-purpose yards (4,925) and career rushing yards (788 carries for 4,620 yards), with the 7th most career rushing yards in Pac-12 history.

Franklin was drafted by the Green Bay Packers for the 2013-14 NFL season, the first step towards what was expected to be a significant NFL future. In Week 12 of his rookie season, Franklin suffered a serious neck injury which forced him to retire. Although the young athlete had always had aspirations beyond football, the injury forced him to reinvent himself.

Franklin found a way to move on, while remaining involved in a meaningful way with the sport and spirit of football. As manager of Community Affairs and Engagement for the Los Angeles Rams, he uses the power of football to develop young people into future leaders. Franklin shares his story as a way to inspire others to create the future they want for themselves. Working with the Rams, he promotes unity throughout the city, and brings hope to neighborhood children who see their future in him.