2010 Edward A. Dickson Alumnus of the Year 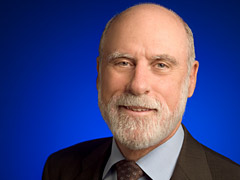 Vinton Cerf is a man whose innovations have changed the world.

Widely known as one of the “Fathers of the Internet,” Cerf co-designed the TCP/IP protocols and the architecture of the Internet. In addition, as vice president of MCI Digital Information Services from 1982 to 1986, he led the engineering of MCI Mail, the first commercial e-mail service to be connected to the Internet.

Since 2005, Cerf has been vice president and chief Internet evangelist of Google, where he is responsible for identifying enabling technologies and applications to support the development of advanced Internet-based products and services.

In 1994, Cerf rejoined MCI as senior vice president of technology strategy to help guide the corporate strategy development from the technical perspective. Before that, he was vice president of the Corporation of National Research Initiatives. Earlier in his career, from 1976 to 1982, he worked with the U.S. Department of Defense Advanced Research Projects Agency, where he played a key role leading the development of Internet and Internet-related pocket data and security technologies.

The recipient of nearly two dozen honorary degrees from around the world, Cerf also has received many of the most prestigious awards and honors, including the Presidential Medal of Freedom, the highest civilian honor bestowed in the U.S., presented by President George W. Bush for work that has “transformed global commerce, communication and entertainment”; the A.M. Turing Award, the highest distinction for computer science; and the National Medal of Technology, presented by President Bill Clinton. In 2006, he was inducted into the National Inventors Hall of Fame.

Cerf earned his bachelor’s degree from Stanford. But it was at UCLA that he received his master’s and Ph.D. and where he was part of the data packet networking group that connected the first nodes of the ARPANET, the predecessor of the Internet. He is currently working with NASA’s Jet Propulsion Laboratory on the interplanetary Internet to communicate from planet to planet.