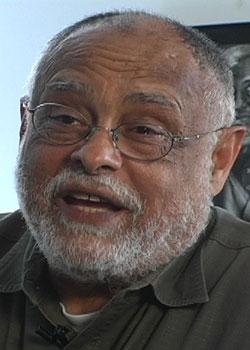 Sankofa, a 1993 film by Haile Gerima ’72, M.F.A. ’76, has been re-released by Netflix
in a digitally restored edition, an effort initiated by another illustrious Bruin filmmaker, Ava DuVernay.

In addition, on Sept. 25, at the opening gala of the $250 million Academy Museum in Los Angeles, Gerima received the museum’s first Vantage Award, designed to recognize “an artist or scholar who has helped contextualize and/or challenge dominant narratives around cinema.”

Gerima emigrated from Ethiopia in the late 1960s to study theater, one of a group of African and African-American students entered the UCLA School of Theater, Film and Television as part of an ethno-communications initiative designed to be responsive to communities of color (also including Asian, Chicano and Native American communities), according to the UCLA Film & Television Archive. The group was later referred to as the “L.A. Rebellion.”

A Washington Post story refers to these filmmakers as “a group of UCLA film students who adamantly refused to cater to the careerist, mainstream Hollywood model of making movies in the late 1960s.”

Thirty years after its release, the film’s seismic effect on the cinematic landscape is easy to underestimate. The film begins in Ghana, where an American model named Mona (Oyafunmike Ogunlano) is posing provocatively for a White photographer, against the backdrop of Cape Coast Castle, a notorious embarkation point for enslaved Africans. After a hallucinatory encounter with the souls imprisoned there, Mona is vaulted back in time to a Southern plantation where, as an enslaved woman named Shola, she navigates violence and degradation, as well as a nuanced taxonomy of survival, from compliance and accommodation to subversion and rebellion.

Poetic, impressionistic and densely layered, “Sankofa” often feels primitive and sometimes painfully obvious. But it exerts the rhythmic power of the incantation that recurs as a motif: “Lingering spirit of the dead, rise up!”