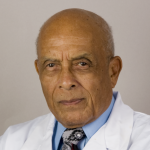 Dr. James D. Collins '57, M.A. '59, passed away on Friday, December 21, 2018, at age 87. He was a professor of radiology at UCLA and was the senior member of the department, having completed his radiology residency at UCLA in 1968 and having been continuously on the faculty since that time.

Dr. Collins received his B.A. degree from UCLA in 1957. During that time, he was a member of the UCLA football team. Dr. Collins also served in the U.S. Army, stationed in Ansbach, Germany. This was followed by graduate work in the UCLA Department of Zoology, which he completed with a M.A. degree in 1959. He attended Meharry Medical College, and graduated in 1963.

Dr. Collins joined the UCLA Radiology faculty after completion of his radiology residency. He was a diagnostic radiologist and performed interventional procedures. Throughout his career, Dr. Collins was an innovator, and he was one of the first clinicians in the department to perform procedures such as lymphangiograms and image-guided biopsies. He was also one of the first to introduce the modality of ultrasound to the department. During his career, Dr. Collins also served as attending physician at Olive View Medical Center, the Veterans Administration Hospital and Martin Luther King, Jr. Hospital.

Dr. Collins was passionate about medical student and resident education. He was an important contributor to the UCLA School of Medicine first-year medical student anatomy course and was at one time the Director of the Medical Student Teaching Program in Radiology for third-year students. He served on numerous medical school committees, including the Admissions Committee, the Education Policy and Curriculum Committee, and the Dean's Committee for Veterans Administration. He also served on the Intercollegiate Athletic Committee.

Dr. Collins gave 250 invited lectures and educational exhibits during his career and was an author of 135 journal articles. He was a reviewer for multiple journals and served as the Radiology Editor for the Journal of the National Medical Association, and Radiology Rounds Section Editor for the Family Practice Recertification Journal. He was a frequent presenter for the American Association of Clinical Anatomy (AACA) and was recognized as the 2017 AACA Honored Member for his significant contributions and activities in the field of clinical anatomy.

His beloved wife, Cecilia Edith Collins, passed away two weeks prior on December 7, 2018. He is survived by his son, Keith Collins, his daughters, Jelana Bentley (Ken) and Jenine Boyd (Charles), nine grandchildren, three great-grandchildren and a host of family, friends and colleagues.

Dr. Collins will be remembered for his exuberance, his pioneering spirit, and his commitment to education and mentoring.