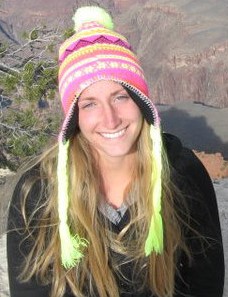 A group bike ride meant to build community and promote bicycle safety ended in tragedy in Flagstaff, Ariz., on May 28, as a tow truck collided with the group, injuring five and killing Joanna Wheaton ’13.

“It would be tragic no matter what, but it’s hitting us even harder because this was one of the shining stars of our community,” ride participant Nick Jones said.

That sentiment has been echoed by friends and colleagues in the Bruin community, where she left an indelible mark as a student and where her energetic, purpose-driven life continued to inspire others even after she graduated.

Chief Sustainability Officer Nurit Katz wrote, “Jo was a warm and vibrant person, truly a bright light and amazing student leader, who brought her whole self to everything she did and touched so many in our community. She helped start Ecochella, the annual bicycle-powered festival which later became Coastalong, and the farmers market on campus, and was involved in many other initiatives. The last time I saw her she brought us all together, her classmates and current student leaders for an E3 reunion. It is so hard to believe she is gone and we will all miss her so much. Her legacy will live on at UCLA and beyond.”

In a video for the student club E3 (Ecology, Economy, Equity), of which she was co-chair, she says, “I know what you’re thinking: you guys are just a bunch of tree huggers.  But in reality, we’re so much more.” Those words applied to the political science major herself, who seemed to have boundless energy, which she used for causes she held dear.  Her efforts in environmental issues, including sustainability, earned her the Alumni Association’s Distinguished Senior Award in 2013.

In an article and video, the Daily Bruin documented Wheaton’s penchant for outside-the-box thinking, tagging along as she led her classmates on dumpster-diving runs: “I’m not really concerned with the world knowing I’m doing this (potentially) illegal activity,” she said. “I actually do feel like I am rescuing food when I’m dumpster diving – I just think that that’s worth it.”

The impact that Wheaton had on her friends and colleagues can be felt in this letter to Wheaton and her family, following her untimely death, by Emily Anderson ’14:

I was fortunate to be one of Joanna’s close friends in college as well as the secretary of E3 during the time that Joanna was the co-chair. Even years after college, Joanna still called me her “friend/secretary.” As any good secretary would, I have detailed files documenting our decade-long friendship/working relationship. It’s hard to believe we have exchanged more than 900 emails over the past 10 years (Yes, I counted!!). Since the news of Joanna’s death, I have been combing through my emails, letters, messages and postcards trying to put into words exactly what Joanna meant to me and the many other UCLA students that she inspired.

When Joanna came to UCLA as a freshman, there was no farmers market, no Eco-chella (Coastalong), no Green Chef competition, etc., etc., etc.

Joanna made it seem so simple to see an opportunity, brainstorm solutions, and then take action. She was continuously looking for new and better ways to make the world a better place. She taught me that you don’t have to wait for someone to tell you what to do, or even to wait for permission. All it takes to make change is to be curious and to find a committed group of people who want to work together.

It reminds me of the Margaret Mead quote, “Never doubt that a small group of thoughtful, committed citizens can change the world; indeed, it’s the only thing that ever has.”

Joanna was the leader of our small group of thoughtful and committed students at UCLA.  She created a legacy – not just in the institutions that she created on UCLA’s campus, but also through the people she empowered and inspired around the world who continue to do impactful work. I can personally say that my career direction shifted directly due to Joanna’s influence. After college, as she traveled to South Africa, New Zealand, and beyond, I’m certain that she left a trail of inspired people making positive changes in their community.

I’ve yet to encounter another person who demonstrates Joanna’s uniquely effective leadership style. She was so successful at projecting confidence, bringing enthusiasm, creating an imaginative culture, and building people up. In addition to her major, three minors and an internship with the Mayor’s office, Joanna led many initiatives with E3. Yet, she never complained about being busy or tired. Even though we were working hard, it never felt like work because we were having so much fun. Her seemingly non-stop energy was contagious and continues to drive me to do more today.

Just weeks before her death, Joanna told me that she spends nearly 100% of her time doing “fun and meaningful” things. In one email, she wrote to me “I simply refuse to let myself get trapped in a profession. Instead, I’m going to spend my time learning from people who know stuff, having captivating conversations with people who want to make the world better. And, surrounding myself with people who have the guts to think outside the box and get their hands dirty.” During this time of shock and grief with Joanna’s unexpected death, I’m finding peace in knowing that this is exactly how she spent her life.

Thank you to the family of Joanna Wheaton for raising such an amazing person! Thank you to all my fellow UCLA alumni for the treasured years we spent learning, growing, and eating out of dumpsters together! And, thank you to Joanna for making my life exponentially more fun and meaningful!

Those who wish to share remembrances and photos of Joanna Wheaton with her family can do so on this Google doc.

If you would like to add some thoughts to this article, please email classnotes@support.ucla.edu.