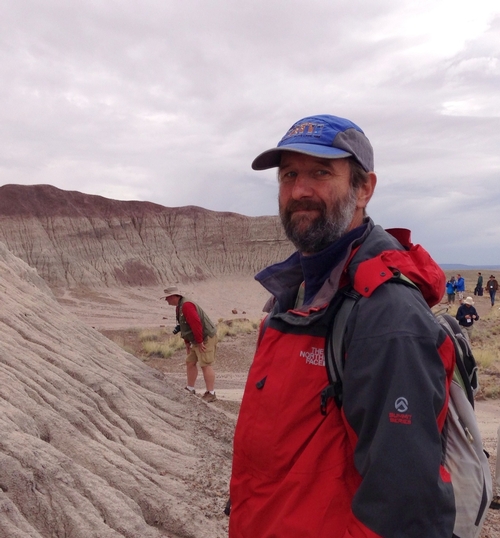 Matthew Heizler, Ph.D. '93, was the recipient of the Distinguished Research Award at the New Mexico Tech spring commencement on May 14 in Socorro, New Mexico. Heizler was one of three recipients of the institution's top faculty awards. This report is an edited extract from the article on NMT's news site.

Heizler, who earned his doctorate in geochemistry, principal senior geochronologist and associate director for laboratories at the New Mexico Bureau of Geology and Mineral Resources. The recipient of the Distinguished Research Award is chosen by a committee of Tech faculty and researchers and is nominated by their colleagues. The winner receives a plaque and a $2,500 cash award.

Heizler is a geochronologist and thermochronologist, which means that he studies the age and history of rocks. He does this work using the Argon-Argon dating method using the world-class laboratory on the New Mexico Tech campus. This lab serves students and professional researchers within New Mexico, around the U.S. and around the world.

During Heizler’s tenure at NMT, he has published 213 peer-reviewed publications that have been cited nearly 5,000 times. He has also written 30 successful proposals, bringing close to $4 million to New Mexico Tech, and has advised and mentored numerous students. Heizler’s nomination for the Distinguished Research Award was supported by colleagues at the University of New Mexico, UCLA, and the University of Edinburgh, who were unanimous in praising his accomplishments, research creativity and collegiality. Particularly noted was his ability to work productively with researchers whose ideas might differ from his own, and to bring together a community of scientists in his field.

Heizler’s research has spanned many topics. His recent work focuses on a new, creative idea to understand the history of rivers by dating volcanic sand grains found in river sediments. In the words of UNM geology professor Dr. Karl Karlstrom, Heizler has initiated a “detrital sanidine revolution — a whole new transformative approach that is supplying the key timing data needed to test and resolve persistent controversies about uplift of the Rockies, age of Grand Canyon, and evolution of the Rio Grande.” Karlstrom further describes Heizler as a “tireless advocate and servant for geoscience research in New Mexico and internationally.”