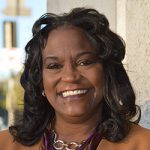 Michelle King '84, the first black woman to be superintendent of the Los Angeles Unified School District, the second-largest district in the nation, passed away Feb. 2. She was 57.

King, who worked for the district for over thirty years as a teacher and administrator, was selected in 2010 by Superintendent Ramón Cortines to serve as his chief of staff. She was deputy superintendent to John Deasy and Cortines before being selected to lead the district in 2016. A cancer diagnosis less than two years later forced her to take medical leave and eventually to step down as superintendent.

A biology major who said that UCLA was where she "found her voice," King was the 2017 Edward A. Dickson Alumnus of the Year. In addition to her undergraduate degree, she earned a master's degree in administration from Pepperdine.