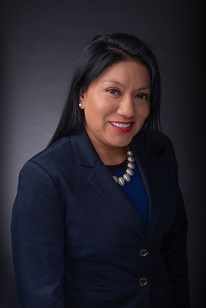 General Counsel for the UCLA Alumni Board of Directors, Araceli Almazan ‘04 has been guided by her passion for law, policy and politics. Her commitment to UCLA arose from the impact UCLA made during a pivotal time in her life, “UCLA has a special place in my heart. The university gave so much to me and opened so many doors, that’s why I give back.” Throughout her journey from first-generation student to her current role as a lawyer and volunteer leader engaging fellow alumni, she has relied on her inquisitive nature and perseverance in pursuit of her goals.

Growing up across the street from UCLA’s crosstown rival, encountering college students on a daily basis, made the idea of higher education a reality, not just a dream. Her parents had what she calls a “visionary outlook on life,” unconditionally supporting Almazan and her brother. “My parents, immigrants from Mexico with elementary school educations, were always very supportive.” While they encouraged her, they didn’t have first-hand knowledge of A-G requirements or standardized tests so Almazan sought help from teachers and counselors. “If you don’t get the answer you want after you’ve asked two people, ask five more. Eventually someone will say yes, or at least get you halfway there.”

Because of overcrowding in her neighborhood school, she attended Robert Frost Middle School and John F. Kennedy High School in Granada Hills. Almazan outperformed many of her classmates academically, yet while they had plans to attend law or medical school, she asked herself why she did not, “It opened my mind to a world of opportunities.” Her junior year she participated in the Chicano Youth Leadership Project (CLYLP), sponsored by Cal State Sacramento to build young people’s leadership potential. She traveled to Sacramento where she toured the capitol, visited the assembly floor and learned about the college admission process. This experience inspired Almazan to set her sights on earning a law degree and work in politics.

Ranked fourth in her high school class, Almazan’s counselor suggested she apply to UCLA, where she was overjoyed to be accepted. That summer, she took part in the Freshman Summer Program which prepares first generation, low-income, underrepresented students for a successful transition to college. She says, “The second I set foot on campus, I was determined to achieve my goal.” When she overheard a fellow student talking about UCLA’s College Honors Program, she sought it out and was admitted as an incoming freshman.

At UCLA, Almazan embraced every available opportunity, or created her own. She says, “Never take yourself out of the running. Don’t make the decision for them. If they say no, then you’re only back to square one.” She traveled to Washington, D.C. through the UCDC program, where she worked in the Department of Education and interned for California’s Lieutenant Governor Cruz Bustamante. She joined several organizations and programs including the Early Academic Outreach Program (EAOP) helping students to become competitive college applicants; MEChA Calmécac as a peer counselor, a student-initiated retention program; and was part of the founding class of Hermanas Unidas, supporting Chicanas/Latinas in their pursuit of higher education.

Almazan was a research assistant for Professor Abel Valenzuela whose research on immigrant day laborers helped frame national conversations. Luskin Public Policy Professor Michael Stoll became a mentor to Almazan writing letters of recommendation. She says, “When I look back on my experience with UCLA, I think about the current undergraduates who share my background and I hope they know about the programs, people and services available to them.”

Almazan graduated with a bachelor’s in political science with honors and a minor in public policy and education. She was a member of Golden Key International Honour Society, the National Society of Collegiate Scholars, and the National Political Science Honor Society – Pi Sigma Alpha. After graduation, she participated in the California Senate Fellows program at the State Capitol. Almazan spent the next several years earning advanced degrees — including a Juris Doctorate from UC Davis; a master’s in public administration with a concentration in public policy from Columbia University; and a second master’s degree in public affairs with a concentration in management from the London School of Economics and Political Science (LSE).

Almazan is currently a senior associate with the law firm Alvarez-Glassman & Colvin, work that combines her career’s common themes of policy, politics and government. She handles both litigation and transactional matters representing municipal entities and public entity clients in all areas of civil litigation. In this role, she is directly involved with the cities of Southeast Los Angeles, where she often crossed paths with Bruins, many in leadership roles in their community.

She joined the Southeast Bruins Alumni Network whose mission is to serve the community as volunteers and ambassadors for UCLA, and soon took on a leadership position. As president of Southeast Bruins for two years, she created opportunities to engage local alumni in UCLA and raise scholarship funds, including wine and cheese mixers, UCLA football watch parties and New Bruin send-offs. The group organized a Thanksgiving turkey drive for 180 local families in need, a teddy bear drive for young patients at UCLA’s Mattel Hospital and a campus tour for middle and high school students, where they visited the alumni center, heard from speakers and wrapped it up with a raffle for UCLA swag.

Almazan also gave back to UCLA by becoming a mentor through UCLA ONE. She credits the guidance she received as a student with her success, and says, “The reason my experience was amazing, in my eyes, is because I took the initiative and asked questions.” In this role, she mentored five students, serving as a sounding board and resource.

As general counsel for the UCLA Alumni Board, Almazan continues her commitment to the Association’s mission to engage alumni directly in UCLA. She continues to reach out to Bruins and encourage others to do the same, saying, “UCLA is a great resource for Bruins, a place to come together and build community.” During the COVID-19 pandemic, Almazan believes the Alumni Association is rising to the challenge in finding new ways to increase alumni participation. She says, “Alumni want to be engaged, and we’re constantly thinking of creative ways for people to get involved, including those who live overseas or far from campus.”

Almazan has recently joined the Chancellor’s Society, a dedicated community of annual donors that represents the model of philanthropic leadership at UCLA, continuing her commitment to the University. She advises students to “take advantage of everything UCLA has to offer. Ask questions, knock on doors. If you were accepted it’s because you have what it takes.”