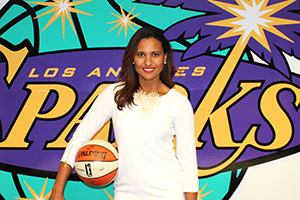 Christine Simmons believes in making a difference in her community. She says, "I'm passionate about community service, I'm passionate about giving back. That's what I love to do."  She brings this commitment to her job as president and chief operations officer of the Los Angeles Sparks, the Los Angeles WNBA team, to her position as president-elect of the UCLA Alumni Association Board of Directors and to her personal life as well. From reaching out to a young girl with a question about disparities between the NBA and WNBA and making her an honorary Sparks’ president and C.O.O. for a day; to volunteering her time and energy with nonprofits and creating positive change in Los Angeles; to working with a charity improving the quality of life in Haiti, she jumps in and gets involved.

Born and raised in Rancho Cucamonga, Calif., Simmons arrived at UCLA during a time of political activity, including the protests and hunger strike for the Chicano Studies Center; the demonstrations against California Proposition 209, barring race as a consideration in public university admissions; and California Proposition 187, denying public services to illegal immigrants. She joined several African-American student organizations and soon took on leaderships roles. Simmons says, "If I could give a voice to someone, I was out doing it… Getting involved in those organizations gave me such joy." As a student leader, she developed her dedication to community involvement and cultivated real-world business skills she uses to this day. In her student work, Simmons learned budgeting, marketing, personnel management and more. She says, "The competitive nature of UCLA and how big it is, helps prepare you for the real world." 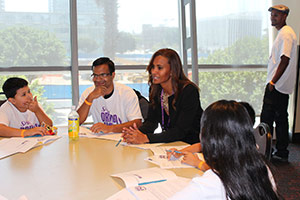 Originally a pre-med student, Simmons' experiences at UCLA led her to choose a different path. Upon graduation, she worked with minority-owned businesses to help them compete for corporate business contracts. In her career in supplier diversity, she created strategic alliances for companies such as United Technologies, Disney and NBC Universal. It was through this work that she reconnected with Earvin "Magic" Johnson, a mentor she met while at UCLA. Eventually, this contact led to her recruitment for her current position when Johnson and his business partners bought the Sparks in 2014. Simmons brings her passion for diversity to directing and coordinating all aspects of business operations for the basketball team. The WNBA is a leader among sports organizations in front-office diversity, but Simmons looks forward to a day when women executives are the rule, not the exception. She says, "From being an athlete in high school, to bringing communities of color, disenfranchised and disempowered people together, to now being a voice for women's professional sports in the business world, brings all of my passions together. I feel so blessed every day that I get this opportunity." 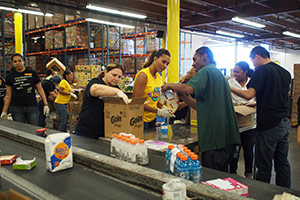 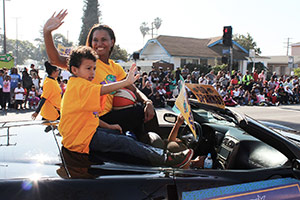 Simmons credits much of her success to her network of social connections - that and her hard work, diligence and sense of adventure. She says, "There's a lot of work an individual has to do to make sure their network is solid. That starts with your reputation and making sure you do what you say you're going to do. Make sure you have authentic relationships with individuals, even if you realize it's mutually beneficial from a professional standpoint."  A woman of color and a working mom, she understands first-hand the power of inclusion. Simmons is mindful of those who blazed the trail before her and passionate about helping the next generation.  She says, "I feel like UCLA gave me this opportunity. It prepared me for this. It fundamentally helped me find my true passion. If it wasn’t for UCLA, who knows what I would be doing right now? I feel I owe the university my career and my success."