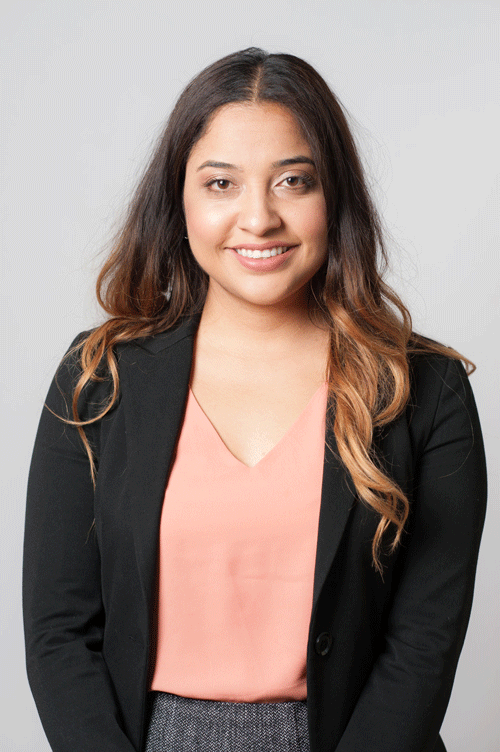 Throughout her journey from first-generation student to justice-driven attorney, Cinthia Flores ‘10 has continually raised the bar while staying in touch with her roots.

A member of the UCLA Alumni Association Board of Directors, she grew up visiting UCLA. Her uncle was a custodial staff member and worked at UCLA for a number of years. On the weekends, he would often take Flores, alongside her brother and cousin onto campus where the three would play sports. Thus, when the time came to decide where to go to college, Flores, who wanted to stay close to her family in the city, didn’t have to look too far.

She went on to major in political science with a specialization in political theory, picking up minors in labor and workplace studies and in Chicana/o studies. Flores also garnered multiple extracurricular recognitions along the way, most notably serving as the first Latina president of the Undergraduate Student Association Council.

Flores was the first in her family to graduate from high school and college, eventually becoming the first to go to graduate school when she earned her juris doctorate from UC Irvine in 2014, serving as the student regent on the UC Board of Regents during her second year and third years of law school.

Being the first of anything is an experience that one can never prepare enough for. Whether in college, law school or as an elected student body official, Flores never knew what to expect. Additionally, being a woman of color from a low-income, mixed-status household came with a different degree of scrutiny, she added.

However, the gifts have always outweighed the challenges.

“I’ve been able to understand that my experience, my life perspective is incredibly important…” Flores said. “Being the first Latina student body president, I was able to gain a better understanding of the resources that were available at the University, and was able to provide some guidance for those communities that have historically been underrepresented.”

Growing up in a single parent household, Flores said her mother was everything to her, a direct representation of success even if their experiences were different.

“She didn’t have a college education,” Flores said. “She hasn’t served on governance boards, she is not an attorney. But what we do share is our values. I am her daughter… Growing up in her home, with her teachings, helped guide me in every turn that my life has taken and will take.”

While she had strong convictions and confidence even as a child, seeing her mother work in the Los Angeles garment industry is what inevitably spurred Flores towards law as a career, specifically working as a labor and immigration attorney.

Her mother would often not rest until she had sewn enough to pay the bills, Flores said. “I also remember her employers [committing] wage theft, delayed payments… Even as a child, I knew there was something wrong with that kind of behavior,” she said. “And so I understood there had to be a way to remedy that injustice somehow.”

From law school to her current position as a board member at the California Agricultural Labor Relations Board, Flores’ pursuit of justice has been a constant undercurrent. The board focuses on adjudicating claims arising out of the Agricultural Labor Relations Act, one of a few state laws that protect agricultural workers. For Flores, the role is an opportunity to directly impact the state’s legal scheme with regards to protecting the rights of farmworkers, many of whom are immigrants like her mother.

“I am very excited about being able to serve in this role, to utilize my training as an attorney, my experience as an immigration litigator, to perform my duties as a board member,” Flores said. “It’s a once in a lifetime experience.”

The importance of leadership roles, whether at the Alumni Association or in other organizations, is grounded in her years growing up in the city, Flores said. She would often help her aunt clean houses, taking a bus to households on the Westside of Los Angeles. This frequent journey led her to notice significant disparities within communities.

UCLA, as a public institution, provides a platform to give back and level the playing field for future generations, she added.

“UCLA provided the platform for me to shine.”, Flores said. “I’m indebted to student organizations and mentors, everybody that invested in me at UCLA. I think it’s appropriate for me to give back… I didn’t have a traditional path, I had to create my own path. And in creating that path, I withstood many, many obstacles. I think it is my responsibility, and my duty to ensure that others don’t have to struggle as much as I did to get to where I’m at.”

The importance of Latinx leadership is another catalyst for Flores, who was recently a featured author in Hispanic Stars Rising: The New Face of Power, a book highlighting over 90 stories of Latinx leaders from diverse backgrounds.

As for her term on the Alumni Association board, Flores said she would like to work with other alumni and eventually create a plan of action for expanding and reinforcing equity in the city of Los Angeles.

“It would be powerful to convene all of us [alumni] and get all of our experiences, our backgrounds, our expertise to devise a holistic plan for the city.” she said.

For Flores, strength of character and a strong support system – from her mother and family to the community she found on campus – has made a world of difference. Through her life’s journey, she has come full circle, able to be a source of support and inspiration for others.