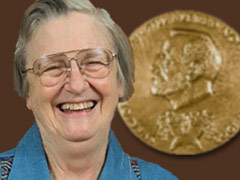 Elinor Ostrom ’54, M.A. ’62, Ph.D. ’65, won the prestigious Sveriges Riksbank Prize in Economic Sciences in Memory of Alfred Nobel – also known as the Nobel prize. She is the first woman to receive the honor since it was first awarded in 1969. She shares the 2009 prize with University of California, Berkeley professor Oliver Williamson.

Ostrom was the first UCLA graduate to win a Nobel since William Sharpe ’55, M.A. ’56, Ph.D. ’61 was awarded the Nobel in 1990, also for economics. UCLA has seven alumni laureates, and six faculty laureates.

In an interview with Adam Smith, editor-in-chief of the Nobel website, Ostrom commented on being the first female to receive the Nobel Prize in economics. “Having lived through an era where I was thinking of going to graduate school and was strongly discouraged because I would never be able to do anything but teach in a city college… [laughs] Life has changed!”

Ostrom was lauded in the statement released by the Royal Swedish Academy of Sciences, citing her win “for her analysis of economic governance, especially the commons.”

The academy cites her extensive work in a number of field sites allowed her to develop a theory that shared properties, especially natural resources, can be managed most effectively by the people who use them. Her groundbreaking research and findings tested traditional assumptions that privatization or governance by a central authority is the only effective means of managing such properties.

Ostrom was a professor at Indiana University and the founding director of the Center for the Study of Institutional Diversity at Arizona State University until her death in 2012. She received more than 30 awards and honors from institutions across the globe, and was a fellow of the American Association for the Advancement of Science and the American Academy of Arts and Sciences, as well as a member of the National Academy of Sciences.

Find out what the Nobel organization and the Los Angeles Times said about Ostrom receiving this prominent award.