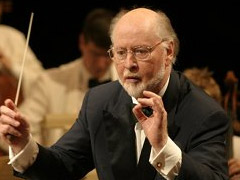 He is the invisible link behind Star Wars, Jaws, E.T., Raiders of the Lost Ark, Jurassic Park and Harry Potter. His work typifies the essence of movie-making magic in the cinematic score. His themes are epic and recognizable, contributing to an ever-evolving forum of popular cultural references. He is alumnus John Williams ’53.

Before Williams became a notable film and television composer, he was a student in Southern California. Moving to Los Angeles from New York in 1948, he attended North Hollywood High School and UCLA. He was drafted into the United States Air Force in 1952, and upon entry served as a composer for several Air Force bands. Two years later with a discharge, he moved back to New York to attend Julliard and subsequently worked with Pink Panther composer Henry Mancini and pop singer Frankie Laine.

Williams again moved west to Los Angeles, and his second move proved fruitful. In the entertainment capital of the world, Williams started his career writing scores for television shows Lost in Space and The Time Tunnel in the late ’50s. Still despite Williams’ numerous contributions to television, he didn’t gain widespread attention until the debut of his music-personified-as-shark score to Jaws. Williams segued into a career with George Lucas and Star Wars.

Today, Williams is best known for his collaborative efforts with another blockbuster director, Steven Spielberg, for whom he has written a range of scores and for which he has received extensive recognition. With 49 Academy Award nominations, he holds the record for the most Oscar nominations of any living person which includes wins for Jaws, Star Wars, E.T., Schindler’s List and Fiddler on the Roof. He has also won seven BAFTAs (British Academy of Film and Television Arts) three Emmys, 21 Grammy Awards and four Golden Globes for conducting and performing. Whether he is writing another Olympics’ theme song or joining forces with fellow musical talents, John Williams is making an indelible impression on movie audiences worldwide.