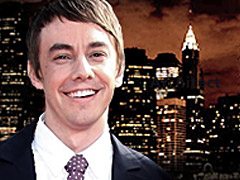 Comedy writer-actor-director Jorm Taccone ’00 was among the UCLA alumni honored with nominations at the 2009 Emmys. Taccone was nominated for his work as a member of the writing staff for NBC’s Saturday Night Live. (For a list of other Bruins who were nominated or work on nominated projects, click here.)

Taccone has been on the SNL writing staff since fall 2005, along with childhood friends Andy Samberg and Akiva Schaffer. Together, the three compose the comedy troupe The Lonely Island.
Since joining the SNL staff, The Lonely Island has been responsible for creating more than 60 SNL digital short films, including Internet favorites Lazy Sunday, I’m on a Boat and the Emmy-winning, off-color short Dick in a Box¸ featuring Justin Timberlake.

Taccone produces much of the music for The Lonely Island including many of the tracks that appear on The Lonely Island’s first album, Icredibad, which was released February 2009. As a director, Taccone is responsible for the SNL shorts MacGruber, Business Meeting, Sloths, Giraffes and others. He also directed a MacGruber Pepsi commercial that aired during the 2009 Super Bowl. In 2007, Taccone co-starred in Paramount’s Hot Rod. He played the lead role of Brett in The Lonely Island’s parody of The OC called The ’Bu, the group’s record-breaking contribution to Channel 101, where he played a ninja who didn’t belong. In the group’s first Channel 101 show, ITV Buzz Countdown, Taccone played Chris Hoffman, a fictional VJ on a parody of MTV’s Total Request Live.

Taccone has appeared on film as Chaka in Land of the Lost and in Role Models as Mitch from Graphics, in which he sings a karaoke version of the Scorpions’ “Rock You Like a Hurricane.” He co-stars in the Gnarls Barkley video for the song “Who’s Gonna Save My Soul“. In August 2009, Taccone began directing his first film, an adaptation of the popular SNL sketch MacGruber, due out in 2010.