As an African American woman and Superior Court judge, double-Bruin Judge Karen L. Robinson '86, J.D. ’89, set her sights high at a young age, and kept striving to achieve her goals. At UCLA, she competed on the same team with some of the fastest runners ever to grace Drake Stadium and became the University’s second Black homecoming queen. Today, with a career packed with firsts — from becoming the first African American mayor of the City of Costa Mesa, to being the first African American woman appointed to the Orange County Superior Court — she is ensuring she won’t be the last, encouraging and mentoring young people to join the legal profession.

Growing up in Louisville, Kentucky, Robinson was looking forward to high school, having won a spot on the JV cheerleading team. So she was crushed to learn that her father accepted a job offer that would move the family to Northern California. Looking back, she says, “In retrospect, it was a great move, which is exactly what my parents told my siblings and me it would be, if we just gave it a chance.”

As the youngest of four children, she had to “walk sooner, learn to talk sooner and learn to think sooner.” She says, “I had to keep up or I got left behind.” When Robinson’s older siblings placed the blame on her for various mishaps, she had to explain her side of the story to her parents, and thus, became her own advocate. The “Robinson family household court” is where Judge Robinson had her earliest lessons in justice and fairness. “After hearing me explain why something wasn’t my fault one time after one of these ‘hearings’ my mom looked at me and said, ‘Karen, honestly, you are so dramatic. You should either be an actress or an attorney.’” This casual comment would set Robinson on the path to her future success.

The family meetings are also where Robinson learned that she could achieve her goals, no matter how lofty. “Though there were practical barriers all around, thanks to my parents, I grew up seeing none of them as a problem. That was crucial for me. It made me fearless and gave me the courage to go out into the world and make my own way.”

In San Jose, Robinson earned a spot on her new high school’s cheer team and was introduced to UCLA. Her principal, Richard Robbins, had played in the UCLA Band, and when the UCLA Football team came to the Bay Area on one occasion, they rehearsed at her school’s football game. When Robinson began her college search, she was recruited to join the UCLA Track & Field team (non-scholarship) by Coach Scott Chisam ’73, and says, “When I completed my college campus visits, I couldn’t see myself anywhere else but in Westwood at UCLA with Drake Stadium as my home for track & field.”

Robinson arrived at UCLA having won local track and field titles and set records. Excited to join the UCLA team, she had what she calls, “the most humbling experience of my life to that point,” as she joined some of track & field’s best, including Florence Griffith Joyner ’83, Arlise Emerson ’83, LaShon Nedd ’83, Jackie Joyner Kersee ’85 and Jeanette Bolden ’93, who would go on to coach the team for 20 years. She describes the experience as life changing, “I saw first-hand what true dedication and commitment to honing a talent actually looked like, and I also saw first-hand the hard work and discipline that is necessary to be the best of the best.”

With her eyes set on law school, at UCLA Robinson majored in political science and completed the coursework for a business certificate “in homage to my father, who suggested I go to business school after graduating to get an MBA, following in his footsteps.” She welcomed the opportunity to explore and grow, participating in many events and activities including track & field, Mardi Gras, Special Olympics, cheerleading, Pre-Law Society and student government. 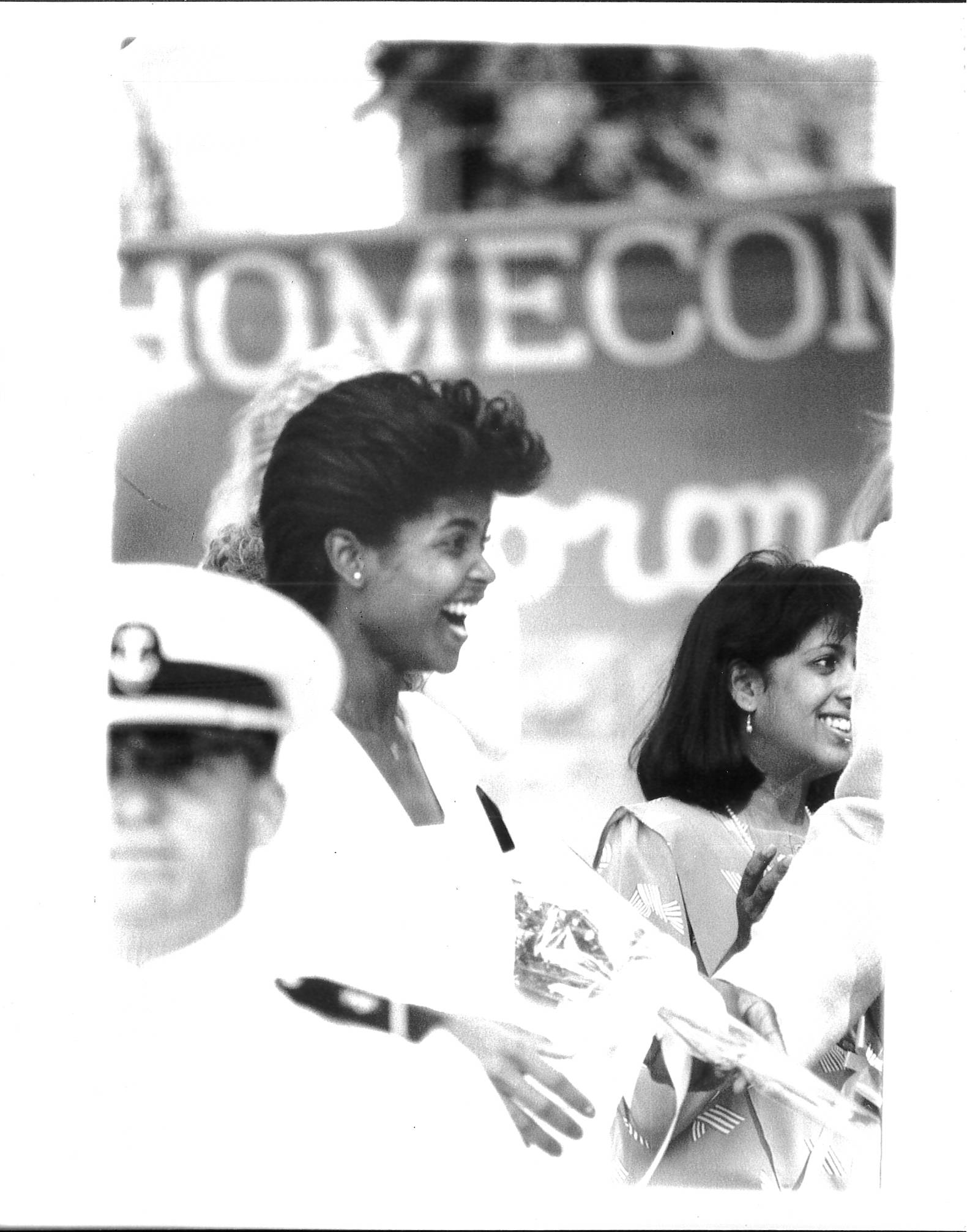 Robinson was a member of UCLA’s 58th Annual Homecoming Court and part of the traditional parade down Bruinwalk. At Ackerman, the court stood on a raised stage surrounded by cheering students, Joe and Josephine Bruin, a full ROTC Color Guard, the Spirit Squad and the UCLA Marching Band. In the audience were friends and family, along with L.A. Mayor Tom Bradley ’41 and Homecoming Grand Marshall seven-time Grammy Award-winner Marilyn McCoo ’64. Much to her surprise, Robinson was crowned UCLA’s second Black homecoming queen. She says “You need only see the photo of me the moment they announced my name to know how completely and utterly surprised I was to win.”

Robinson had soon achieved her early goals — doing well in college and law school and passing the California Bar Exam on her first try. However, her next goal of becoming a judge required her to think carefully about her next steps. To acquire the public service experience and exposure to a broad range of challenging legal issues she desired, Robinson left private practice to join the Office of General Counsel for the California State University system, becoming Litigation Counsel Coordinator for the entire 23 Campus System. In this role, she carried a caseload, supervised the work of five in-house litigators, assigned matters to outside counsel and handled numerous other substantive and administrative duties.

Judge Robinson says that breaking down barriers in her career has been a moving and humbling experience. She is paving the way for the next generation, and seeing the positive impact that diversity and inclusion have made in the legal field. She says that the legal profession is no longer off limits to historically underrepresented community members like herself. “Trust and confidence in our local city government and in our courts is imperative to their successful operation. I believe my “firsts” in both areas have helped to build that trust and confidence here in Orange County.”

In 2018, Judge Robinson received the Judge of the Year award from the Orange County Women Lawyers Association, an affiliate of the Orange County Bar Association founded to promote the advancement of women in the legal profession. Robinson was the first African American woman to receive this recognition. 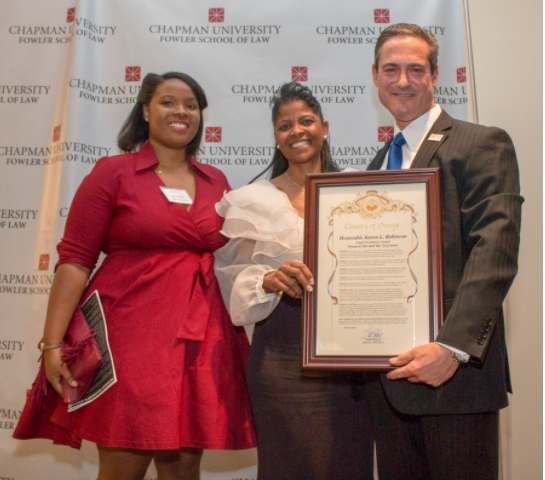 For Judge Robinson, the honor is a special one. “First, Thurgood Marshall is one of the Supreme Court Justices that I most admire, so to receive an award from an organization carrying on his legacy and with his name was incredibly special. And then to have the award named in my honor for all future recipients, in a tribute to and acknowledgment of my hard work on and off the bench, was simply the pièce de résistance.”

Judge Robinson believes that building diversity in the legal profession means mentoring and encouraging young people from underrepresented communities as early as high school to pursue a career in law. A mentor, and a former mentee, she has seen first-hand the positive impact of both. She says, “To see barriers broken, and to see someone with characteristics like you breaking them, is inspiring and provides hope that other barriers can also be broken.”

When Robinson chose UCLA, she knew she would be a “small fish in a very big pond.” However, she says, “My experience at UCLA gave me the tools I needed to successfully navigate my way in the biggest space and place of all — life — and how to make my own mark in the endeavors I chose to undertake.”