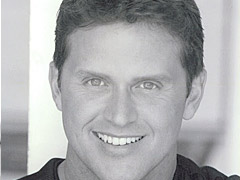 Kelly Perdew M.B.A. '95, J.D. '96 is the Bruin who had former contestant and The Apprentice commentator Omarosa so befuddled. Winner of the show’s second season, Kelly was easy to spot – he was the guy wearing nothing but boxers to answer Donald Trump's morning calls, and sporting a UCLA logo visor and shirt at most other times.

Befuddled though she was, Omarosa had stumbled onto the key to Kelly's strategy in her confused commentary. A graduate of the U.S. Military Academy at West Point, Kelly told Entertainment Weekly “My military experience will really help me out.” Combine that with additional professional skills and compassion gained at UCLA, and Kelly had the mark of a winner.

He chose his battles wisely - hanging back at first and letting the weaker players grab screen time and engineer their own firings. Then he stepped forward and won three challenges in which he was the project manager while earning the respect of his fellow players and the viewing audience. After one challenge, Kelly successfully lobbied Trump to donate his team's profit to a leukemia charity.

Since winning The Apprentice, Kelly has been assigned to guide several major projects for the Trump Organization. Kelly brought a wealth of real business experience to this televised “reality” competition. He's raised $5 million in equity financing for three start-up companies. As acting president, he led the sale of one of those (eteamz.com - the largest amateur sports portal on the Web at the time) for eight figures to a company that has since filed for an IPO. He was cofounder and chair of motor enthusiast community MotorPride.com and was president of CoreObjects, an outsourced software development company based in Los Angeles.

Kelly was the co-founder, President & CEO of K12 Productions, LLC, an event marketing and production company that he grew to profitability. Prior to eteamz and K12 Productions, he was a strategy manager at Deloitte Consulting in the technology practice. Prior to Deloitte, Kelly led business development and was acting CFO for a video conferencing service provider, where he helped grow sales to clients such as Lehman Brothers, AETNA and the FBI. Kelly also served as a military intelligence officer in the U.S. Army and successfully completed both airborne and ranger training.

You can find out more about Kelly at his homepage.