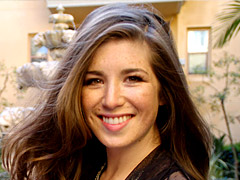 One of the reasons Costello chose to attend UCLA was because it would provide her with skills to continue building Marrin Costello Designs. Her choice to pursue an art history degree would serve as a source of inspiration for her jewelry designs. The pictures of ancient art and architecture in her art history textbooks continue to ignite jewelry ideas and innovations. She also declared a double minor in Language, Interaction and Culture along with Human Complex Systems. All of her studies combined would inevitably help Costello master material iconography and the business side of art production.

As an artist, Costello says she finds inspiration all around her – in architecture, in her jewelry archives, from friends and family members, and in all pieces of art. She is particularly inspired by her art history background in Egyptology.

Balancing a major and two minors while solely running a handmade jewelry business is no small feat and Costello attributes much of her success to UCLA’s supportive environment. Making jewelry and running her business from the dorms, and then later from her sorority house, offered an escape from the stressful demands of academia. Jewelry-making continues to be a therapeutic process for the designer.

After graduating UCLA, magna cum laude, Costello took on her business full-time, and knowledge of her business and of her jewelry has spread nationwide. Along with holding seasonal sales and showcases throughout the year, her work has been featured in boutiques nationwide including Daisy’s and The Watch Hospital in Alameda, California along with Splash, Springlake Camels Eye, and Waterlily Boutiques in New Jersey. Most recently, Costello sold her jewelry to four stores in Boston, one store in Connecticut, and at a trunk show in New York City. Costello’s jewelry has also appeared in Alameda Magazine’s September 2011 issue and on television when American Idol contestant Brooke White wore 3 jewelry pieces while hosting the TV Guide Network pre-show. Additionally, Costello is working to spread her line to men’s jewelry.

“I think the most amazing thing is seeing people smile when they see a Marrin Costello Design that they love. Learning people’s unique styles and making personal jewelry for people is really rewarding,” Costello describes.

Costello advises fellow and future entrepreneurs to, “Go for it, even if you are still in school. If you don’t it will be one of your biggest regrets, and there is really nothing to lose.”