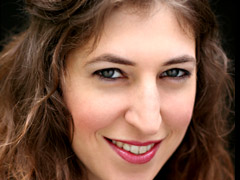 Does Dr. Amy Farrah Fowler on the ABC sitcom Big Bang Theory seem a little familiar to you? Maybe it’s because you had a class with her at UCLA. Actress Mayim Bialik ’00, PhD.’07 who plays delightfully smart, funny and nerdy Amy earned her undergraduate, and doctorate degrees at UCLA. The actress even shares a similar field of study with her TV alter ego – Amy Farrah Fowler holds a doctorate in neuro-biology, while actress Bialik holds a doctorate in neuroscience.

From 1991 to 1995, Bialik played the eponymous role on NBC’s Blossom, where she explored life’s issues with slightly older and more experienced friend Six. Although “This week on a very special episode of Blossom …” became a standard punch line, the show earned wide respect for mixing drama with comedy in a frank exploration of weighty topics, such as substance abuse and having sex for the first time.

When Blossom ended, Bialik enrolled at UCLA, earning degrees in neuroscience, Jewish studies and Hebrew. She took a break from live acting, though she did voice work on some animated series, including Johnny Bravo, Hey Arnold and Kim Possible.

In 2005, Bialik took time out of her graduate studies in neuroscience to step in front of the cameras again, playing a fictionalized version of herself on Kirsty Alley’s pseudo-reality Showtime series, Fat Actress. Bialik stole the show in a two-episode story arc, in which she reminds Alley that she is a genius by figuring out Alley’s digital security code. Bialik also tapped into her neuroscience background, tells Alley about the Koi Theory of weight loss – a body shrinks to fit miniature surroundings – which turns out to be part Bialik’s evil revenge scheme.

Bialik first gained attention and critical praise playing a childhood version of Bette Midler’s character in the 1988 film Beaches. Her other more recent appearances include the feature films Kalamazoo? (2005) and The Chicago 8 (2011) and television shows Curb Your Enthusiasm, Bones, Saving Grace and The Secret Life of the American Teenager.