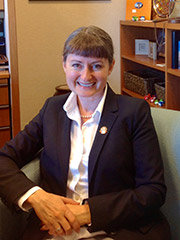 Mayor Meghan Sahli-Wells ’97 is the perfect example of thinking globally and acting locally. As mayor of Culver City, located just south of Westwood, she’s a great proponent of sustainability and community projects, and her work in city council helped make her city stand out among the rest. Much of her life’s work, she credits to lessons she learned at UCLA as a World Arts and Cultures (WAC) and French major.

But her story with the campus began much earlier. As a child, she spent many afternoons skating by the Murphy Sculpture Garden and sitting in the back of lecture halls while her mother earned both a bachelor and master’s degrees in the early 80s. When it came time to apply for colleges, she based her decision on the WAC major, having attended art schools for her elementary and high school education in Culver City. The WAC major has developed through the years but mainly “emphasizes the development of interdisciplinary, intercultural perspectives on the arts, grounded in independent research and field study.” This shaped her world perspective and was key to her work in Culver City.

As an undergrad Sahli-Wells embraced the notion of intercultural perspective and field study. She studied abroad in France for two years, then spent five months living in Ouagadougou and travelled around West Africa. After completing her degree, she returned to France and studied visual anthropology in Paris. She completed fieldwork in Madagascar with a local community and orphanage. She married, started a family and lived in France for nine years before returning to Culver City in 2007, having lived abroad for 15 years.

Sahli-Wells is one of five elected city council members who rotate in the mayor’s position. Before running for city council she was an activist in her community working on increasing citizen involvement and for better transportation. Through her involvement she learned the process of local government and she realized she wanted to be part of the conversation. In 2010, her first run for elected office ended in defeat by 32 votes. After the election Sahli-Well continued to become even more involved, networking and developing relationships with neighbors and other citizens. In 2012, she was elected to the Culver City council, as the only elected woman currently in the council and only the fifth to serve in the city’s 100-year history. 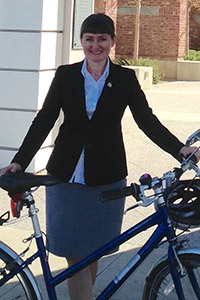 A daily bike commuter herself, Sahli-Wells takes part in the Culver City Safe Routes to School Program which encourages kids to walk or bike to school. The Culver City Walk & Rollers works with all five elementary schools and the middle school – they meet in a designated place and act as a walking school bus, picking up kids on their way.

As mayor, one of her priorities is for Culver City to become the best U.S. city to raise children. As one of the smaller cities, Culver City has already attained high rankings for schools, parks, safety and being a full-service city. She follows the 8-80 rule to make the city safe for anyone from 8 years old to 80 years old. She says, “When you’re making a city that’s good for kids, you’re creating a city that’s good for everybody.”

Another priority is making Culver City affordable to the more than 40,000 residents who live and work within the five square mile radius. Affordability is a crisis in the Los Angeles area that Sahli-Wells would like to combat in her district. To do so she enlisted the help of Rosalie Ray, research assistant at the Center for the Study of Inequality at UCLA’s Luskin School of Public Affairs. Ray works as an intern to study how housing can be made more affordable to residents in the area.

The other big goal for Sahli-Wells is sustainability. Through her involvement in various local and regional committees she is looking at programs that would help Culver City become more drought-tolerant and ocean-friendly. Such programs include storm water management, conservation through education, pilot garden projects, workshops and improving city landscaping. Beginning composting programs at schools helps to educate kids on sustainability. City restaurants have also been more open to composting. Culver City transportation, one of the most efficient in the U.S., also continues to expand. These are all programs Sahli-Wells is proud to have grown during her tenure in city council.

Sahli-Wells believes that by being involved locally you have the most power and can have the most direct impact. “Democracy is participating and letting your voice be heard, no matter who you are.” She prides herself in describing her Culver City as small, urban, diverse and pretty progressive. She believes in having formal and informal ways of reaching out and working together to get problems solved. Her partnerships with UCLA, Antioch and Loyola Marymount College assist her in reaching out to the community and making progress. She says, “The more we work together and learn from each other the more effective we can be.”

Sahli-Wells continues to practice the core values of the World Arts and Culture major and credits one class in particular` for her philosophy, Art as Moral Action, taught by Peter Sellars. “What I learned in that class is what I ended up doing in life” she says.

What’s next for the mayor? She just received a call from the White House asking her city to join President Obama’s My Brother’s Keeper Community Challenge. The program “encourages communities to implement a coherent cradle-to-college-and-career strategy for improving the life outcomes of all young people to ensure that they can reach their full potential, regardless of who they are, where they come from, or the circumstances into which they are born.” It’s a challenge she has enthusiastically accepted.

“I am fortunate to be where I am and to be of service.”