The following was written by William Russell (Russ) Ellis Jr. '59, M.A. '65, Ph.D. '69, who starred on the UCLA Track and Field team, which, led by Rafer Johnson '59, would win the NCAA Championship in 1956. Read about Ellis' fascinating life in his Bruin Story.

It was 1954 – in the summer, I think. I did not know the young decathlete Rafer Johnson at the time, and was surprised to glimpse his wry smile as the three of us leaned — spread-eagled — against a wall, somewhere south of Ciro’s, the popular West Hollywood music venue on Sunset Boulevard. Rafer’s face seemed to betray a kind of shrewd, if ambiguous, insight that he was getting from the experience.

The third one spread against the wall was Leamon King, a blazing-fast sprinter from Delano High School in the Central Valley. California’s food basket had also produced Rafer Johnson, who was visiting from his hometown of Kingsburg. When I looked at Leamon to my left, he seemed tense enough to shatter.

I was a sophomore at UCLA and could not possibly have afforded [the five tickets I had to see Nat King Cole perform at Ciro’s that night]. But I was a member of UCLA’s developing track and field team and, for some reason, had gained a reputation in the athletic department as a useful recruiter of Black athletes. So I was asked to entertain these two stellar high school track athletes and was given the bucks to do so. I chose Ciro’s.

Accompanied by two attractive UCLA coeds — all of us Black — we were stopped at the door because Rafer was not wearing a tie. I was about to protest when Rafer calmly asked about the ties in a display case and learned that they were for rent. He chose a bow tie. 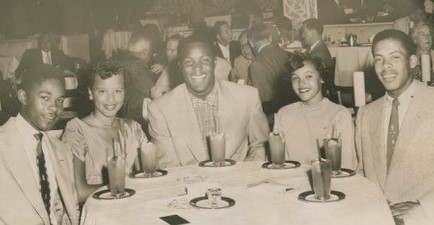 A Night at Ciro's: Rafer Johnson is in the center, Russ Ellis is at right.

We entered, but Leamon never quite recovered from the attempted rejection. Both he and Rafer came from deeply Christian families. I later learned that Leamon’s mother had warned him about the devil lurking in Los Angeles...

We left Ciro’s delighted with Cole’s show. The young ladies were animated. Neither Rafer nor Leamon was particularly talkative. Rafer was, however, open and responsive. Leamon was taciturn and apparently still hurting from the necktie encounter. Despite that, the evening felt like a success as I drove everyone home — ladies first — in my immaculate 1941 Ford sedan. Heading to drop off the guys, suddenly we heard the scream of a police siren, with bright headlights and a flashing spotlight in my rearview mirror.

Having lived in Southeast L.A., I knew enough to be frightened by the Los Angeles police. I had attended Compton High School and lived at the southern end of the census tract that contained 90 percent of L.A.’s Black population. I had heard searing reports of Black guys’ violent encounters with L.A. cops, but as a star athlete at Compton High, I did not have to prove my manhood in ways that might bring me to their attention. I did understand viscerally that it took very little for Black men to attract the cops’ attention.

So, when the fire-breathing “bad cop” ordered us out of the car and up against the wall, I was terrified, though for the recruits’ sake, I tried to appear not to be.

We had stopped at a store so that Rafer could buy a toothbrush and toothpaste, which he held in a small brown paper bag as he leaned against the wall. For some reason, this bag further enraged the bad cop. Coming threateningly closer, he ordered Rafer to drop the bag — and not to move while doing it.

After we were frisked, the “good cop” explained to us that three adult Negro males fitting our description – that is, they were young, male and Black — had just been involved in some horrendous crime. He asked a lot of questions about where we had been and what we had been doing. Leaving us with “Bad,” “Good” went to his car to run makes on us. Taking an ample amount of time, he returned with more questions and slowly, almost reluctantly, he let us go. He did so without comment, much less even a feigned apology.

I strongly suspected we had lost Leamon. About Rafer, I could not tell. I was fascinated that he seemed to have been enlivened by the whole evening. All of it, including the cop encounter.

Shortly thereafter, I learned that Leamon had opted to attend UC Berkeley. Rafer chose UCLA. Had Leamon joined our team, UCLA would have immediately become a contender for both the Pacific Coast Conference and NCAA championships. It took until 1956 for us to do both, with Rafer in the lead...

When looking back on that night at Ciro’s, I sometimes feel tempted to thank Chief Parker’s famously racist police force for adding to what seemed like Rafer’s first Los Angeles adventure. However, I don’t know what role the evening’s events played in his decision. I never asked Rafer, but I can still visualize his enigmatic smile as he stood pressed against that wall.