True Bruin Spirit Will Not Be Held Down 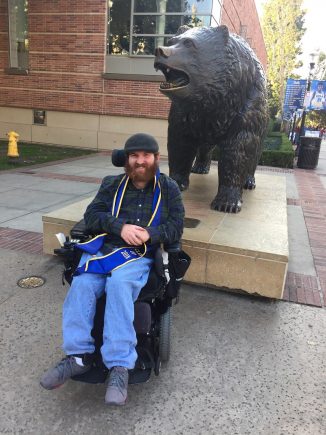 Most residents of the greater Los Angeles area would probably not rate “ease of getting around” as one of the top benefits of living here. Sam Hersch ’18 is an exception – which is all the more remarkable given the fact that he has cerebral palsy and is confined to a wheelchair. But that is far from the only thing that is exceptional about Hersch, who will not be slowed in his desire to give back to those who have helped him and to be an active participant in things that he loves, regardless of the challenges involved.

Hersch then had a choice to make – complete his bachelor’s degree at UCLA, with which he was familiar from having visited friends on campus, or go to UC Berkeley, where he had also been accepted.

Although he grew up in San Francisco, he did not choose Cal, in part because of the difficulty of navigating the hills in the Bay Area. “My mom lives in Sausalito and she wanted me to move to Berkeley and Oakland and I said look…the great thing about me being here is that I can go around Westwood, to Santa Monica, to WeHo, to NoHo, to mid-Wilshire, to Downtown L.A. – and back. If I was living in Oakland, I would just have to make do with Oakland or Berkeley.”

The familiarity with UCLA that he had developed while attending community college was also a major contributing factor to his choice to stay in Southern California.

“I sort of knew how to navigate my way around UCLA. Even after my friends graduated, all the way back in 2012, I found myself on campus in the classics department one day attending a public lecture. And the classics department was very open. So that’s when I realized, OK this is my major, this is what I’m going to get my degree in because they were just incredibly welcoming and loving. It was a small major with a whole bunch of intriguing classes like ‘The Legacy of Ancient Medicine’ or ‘Greek Sculpture.’’ He graduated cum laude from UCLA in the fall of 2018, but still lives in Los Angeles, having moved from Westwood to North Hollywood after completing his degree.

“I can’t see myself living anywhere else. I’m just enthralled by the ability that I have to take the bus and the metro here and there and back again. It’s certainly very liberating; I’m not trapped in my house anymore.”

Even his take on financial independence is different from what one might expect. Having graduated, he said, “I’ve got to find work. I’m on social security. I have been on social security ever since I was legal. The downside of that is I don’t know what it’s like to work; I don’t know what me working eight hours a day looks like. I don’t know if I’m given more than $2000 - and I know I have responsibility for paying the rent, and this, that and the other - how I’ll deal with being thrust into an all-out capitalist economy with no ceiling as far as the amount of money I can earn. Social security is not the best method for teaching anybody about financial literacy because you can’t save much.”

He knows what he wants to do for a career: human resources or student advising. It all stems from his experience as a special needs student.

“Once, twice, sometimes even three times a year, I was taken to a conference room for one or two hours and around that conference table were my parents, my teachers, the special education director for the district, my psychologist, the school psychologist, the mental health professional, my aid – everyone that ever had a bearing on my success. They would tell me what I was doing right and what I was doing wrong and where I needed to improve. My teachers would submit grossly detailed reports about how I was doing. And one day it just hit a switch for me that these people care about my success and I owe it to them to do as well as I can and not to let those people down. I’m here to do it for me, but, more importantly, I’m here for those people. And what that’s helped me kind of figure out is that I’m good at sort of identifying where people are succeeding and where they’ve gone wrong. I know I have the capacity to talk to people…’you’re doing this well, you’re doing that poorly, do you need any help’ – things like that. I’m excited about getting into the work force - it’s a great unknown, it’s a wonderful adventure because I’ve been in school for 23 of the last 28 years of my life.”

A year after graduating, he is still looking for a job, working with the non-profit Best Buddies, which attempts to secure jobs for people with disabilities. As usual with Hersch, this is not a one-sided relationship: his mother was recently honored as the organization’s top fundraiser, and he gave the speech introducing her at the awards ceremony.

Since graduating he has stayed busy: in the last year he has self-published four books on photography and created a website that can be used by professional dancers, and those aspiring to be.

The books – containing Hersch’s photographs taken in and around Los Angeles – came about because he “didn’t want to sit (around) and wait for a job to happen. I wanted to be as productive as I could be, even during this time.” His website, QuestionsForDancers.com, is home to a questionnaire that seeks to document the importance of social media in establishing a dancer’s career. “I’m close with a lot of the singers and dancers on campus – a lot of my friends outside of school are professional dancers – and I’ve been supporting the them for the last eight years or so.”

The involvement with the dance community happened organically and is typical of Hersch’s approach to life – when he likes something, he gets involved in every way he can.

On the horizon are dancing lessons from a friend who was Ed Sheeran’s dance partner in the “Thinking Out Loud” video. “I’ve gotten very good at partnering,” he says. The comment was meant in reference to his dancing skills, yet it’s a fitting summation of his outlook on life. It’s all about partnering - getting involved and giving back.