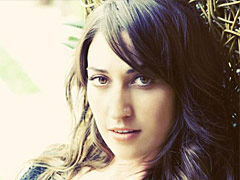 She’s toured with big names. In April 2005, she signed with Epic Records. But according to up-and-coming singer-songwriter Sara Bareilles ’03, “It’s about the music. End of story.”

This steadfast passion towards music combined with the soulful power of her voice and the clever honesty of her lyrics has captivated audiences across the country. Sara started performing in front of large audiences at UCLA’s annual Spring Sing talent show while she was a student. Since graduating, she has performed her jazz, pop and soul-influenced melodies at venues throughout California, the East Coast and the U.K. She has toured with fellow Bruins in Maroon 5 and Raining Jane as well as with Marc Broussard. You can catch her regular gigs at LA venues such as Hotel Café and Temple Bar, where her poignant “little voice” is sure to arrest your attention and sweep you away.

1. What have you been doing to further your music career since leaving UCLA?

After I graduated, I stayed mostly in L.A. and started playing live shows more regularly. Honestly, I thank UCLA for providing me with such a strong support system of fans and fellow musicians. Shortly after school, I was invited to join an east coast college tour with my friends from Maroon 5. In the following months I started my first residency at Hotel Café, where I found an incredible network of musicians and friends. I met my manager shortly afterwards, and through continued live performances, a growing fan base and industry showcases, I signed with Epic last year.

Taking a step back makes me realize what a wild ride it’s been. Oftentimes, I felt stuck because months would pass by when nothing happened. I waited for the industry to open doors and received horrible responses, so I stopped asking for favors. I got my priorities straight and refocused on the music, my band and the live performance, which is my favorite place to be.

2. Did Spring Sing affect your career?

My first solo performance in front of a large audience was at Spring Sing 2001. It is such an amazing event because it brings so many creative people together on one stage. The experience drove home my goal to be a musician. Spring Sing was also instrumental in getting my music out to the public. The fans I gained from performing at Spring Sing throughout my college years have come out to my shows all along the way.

3. How has your music changed since your Spring Sing performances?

During Spring Sing, I performed solo and my musical creativity was limited to me and my piano. Now, playing with the great musicians in my band, I’ve been inspired to broaden my musical vocabulary. I’ve been able to explore more funk, jazz and R&B and hopefully, I’ve created music that is a mixture of all my favorite parts of each genre.

4. Was landing a major label deal a primary goal?

Finding a label was not my first priority. My experience with self-promotion has not been remarkable. Dealing with rejection from the industry was really tough and it was hard to keep my spirits up. At times, the pursuit of a career in the recording industry can feel hopeless because the industry itself is so uncertain. Luckily, I’ve had an amazing support system that constantly reminds me to focus on the music. At the end of the day, connecting with the audience during the live performance transcends whatever the industry will morph into. My absolute priority is to make sure my relationship to the music is honest and true.

5. What has your touring experiences been like? Any memorable stories?

The tours have all been amazing. I’ve been blessed with the opportunity to tour with incredible musicians. Touring brings the focus back on the live performance and I get to experience this sincere intimacy with the audience. Some artists naturally exude this larger-than-life presence onstage, yet there is something to be said about those who appear easily accessible. You feel like you can have a cup of coffee with them after the show.

While I was opening for Maroon 5 at the Brixton Academy in London, I had the opportunity to try a song by myself—back to just my piano and me. I was incredibly nervous because I knew the audience members weren’t there to see me and they were just lending me their ears momentarily in anticipation of the main act. It went surprisingly well and it felt surreal to make a real connection with such a large audience.

To be honest, I am the same person onstage as I am in everyday life. Live performance gives room for lots of mistakes. During the first show of my East Coast tour with Marc Broussard, I completely forgot the words to a song. I stopped in the middle and swore like a sailor. Unexpectedly, the audience was really forgiving. I’ve found the public appreciate mistakes because they can relate to human imperfection and vulnerability.

6. What do you want your audience to get from your shows?

I hope my audiences come away feeling like they saw someone singing and playing her heart out; that I was honest, vulnerable and true to my gut. Those expressions can never be contrived.

7. How did you decide to pursue music as a career?

To me, music wasn’t a choice. It wasn’t something I just sat down and decided. Music keeps me sane; writing and performing is part of who I am. I just started playing shows and it makes sense to keep doing it until something else comes along that makes me feel differently. Whether or not I am a performer forever doesn’t change the fact that music will always be in my life.

I give a lot of credit to my family. They didn’t pressure me to choose a more reliable career. They never grappled with me about making music my life.

8. Who are your musical influences?

I draw from artists such as Ray Charles, Etta James, The Police, Prince, Fiona Apple, Bill Withers, Joni Mitchell, Paul Simon, Dave Matthews, Death Cab for Cutie, and the list goes on and on. They all inspire me in uniquely beautiful ways. Some artists shape my writing, and others effect my musical arrangements and chord structures.

9. Your demo, Careful Confessions, was produced before you were signed. How has recording your upcoming record with Epic differed from recording your demo?

I feel more pressure this time around. This record isn’t just about what I want; I have to please multiple people. Being signed brings the pressure of having to be commercially viable and personal and honest at the same time. Fortunately, I’m working with people who want to preserve my voice on this record. They’re asking me to record what I want to record. Although there’s been a lot of compromise, I haven’t recorded anything that doesn’t still feel like me.

10. Several Bruins worked on your “Fairytale” music video. Was this cooperative effort intentional?

Yes, they are all part of the UCLA network of support that I mentioned.

For the record, the following Bruins helped make the film: