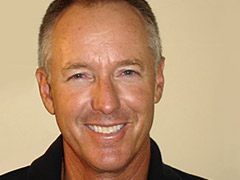 A native of Santa Monica, Sinjin Smith ’87 started playing beach volleyball as a child just five miles away from what would become is alma mater. Smith was only 15 years old when he began playing in competitive tournaments around Los Angeles and the foundation he gained from these experiences would ultimately lead him to have success in both beach and indoor volleyball.

Smith had a storied athletic career at UCLA and led the men’s volleyball team to back-to-back NCAA championships in 1978 and 1979. He also received All-American honors in those two seasons with UCLA. In 1979 Smith joined the US Men’s National Team and competed with them for three years, but soon transitioned from indoor volleyball into exclusively beach volleyball competition.

Smith teamed up with fellow Bruin Karch Kiraly ’83 to win the original “King of the Beach” at the Manhattan Open in 1979. He would go on to win this competition, considered to be the premier beach volleyball tournament, four more times in 1980, 1982, 1986 and 1989. Smith and Kiraly dominated the beach volleyball world throughout the 1980s and firmly cemented their place in the pantheon of beach volleyball greats. Smith was the first player to reach 100 career open victories and was named the Association of Volleyball Professionals (AVP) Best Defensive Player three times, while winning the AVP International Championship five times in 1979, 1981, 1982, 1988 and 1990.

Smith played an integral role in the negotiation and introduction of beach volleyball as an Olympic sport, and in 1996 he played in the inaugural beach volleyball competition at the Olympic Games in Atlanta. He and his partner, Carl Henkel, placed fifth in the competition. After the Olympics he continued work with the development of beach volleyball as a professional sport. He had participated in the formation of the Association of Volleyball Professionals in 1983, where he served on the board of directors and was president from 1985-1990. He was a founding member of the Federation Internationale de Volleyball (FIVB) Beach Volleyball World Council – part of the international governing body for the sport of indoor, beach and grass volleyball – and is the current president of that council. Smith continues to be involved with the Olympic Games and has been a member of the control committee, which oversees all aspects of beach volleyball events, for the Sydney, Athens, Beijing and 2012 London Olympics.

Smith has served as a television commentator for various networks, written two books, starred in the beach volleyball film Side Out and was featured alongside long-time teammate Randy Stoklos in a beach volleyball video game called Kings of the Beach.

Smith has been involved with a number of charities including the Side-Out Foundation which supports health care professionals in the fight against breast cancer and was a board member for Big Brothers and Sisters of Los Angeles.