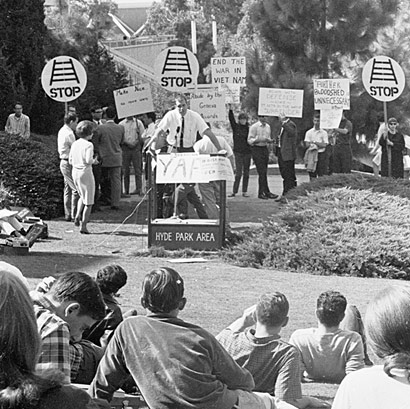 The grassy knoll nestled between Kerckhoff Hall and Bruin Walk has long served as the platform for everything from shouting matches and student protests to impromptu celebrations and performances.

Having survived a shift from its original location near Janss Steps, where it was dubbed “Hyde Park” – a reference to the London park well-known for its public displays of free speech – it was renamed on Dec. 1, 1965 by the Student Legislative Council in memory of beloved philosophy professor and activist Hans Meyerhoff ’36, M.A. ’38, Ph.D. ’42.

Meyerhoff, known for using his philosophy teachings to understand the societal concerns of the time, had unexpectedly died one month earlier in a car accident. Just before his death, he represented the Vietnam War opposition speakers at UCLA’s Hyde Park. Meyerhoff delivered his speech atop the green soapbox to over 2,000 students who had congregated to hear opposing views on the conflict. 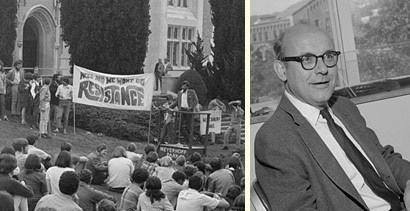 Meyerhoff immigrated to the United States in 1934 because of a Nazi edict forbidding the matriculation of Jewish students in German universities. He enrolled at UCLA, continuing his education until receiving his doctorate in 1942. He then went on to serve in the U.S. Army. Meyerhoff returned to UCLA in 1948, joining the philosophy department, where he taught until his death.

In January 1966, the UC Board of Regents formally approved Hans Meyerhoff Park in memory of the philosophy professor.

The creation of a space for public expression on campus originated during the Free Speech Movement at UC Berkeley in the 1960s. Although supported by UCLA’s administration, some doubted the area’s usefulness and longevity. Byron Atkinson, dean of students at the time, suggested to Chancellor Charles E. Young that “within a year or two its use will become as imaginary as its boundaries.”

In subsequent years, students have gathered in Meyerhoff Park to commemorate the shootings at Kent State University, bring attention to victims of genocide, rally on affirmative action, or anxiously await the results of student body government elections. Given its prominent location amid the heavy foot traffic of Bruin Walk, Meyerhoff Park has remained a popular location for students, faculty and staff to host rallies and debates and where onlookers can turn into impromptu participants at moment’s notice.

Top image: Ralph Westfall, president of the John Birch Society, speaks in favor of the Vietnam War during a rally held in Hyde Park on Oct. 15, 1965. More than 2,000 students congregated to hear speakers voice their opinions on the war. Prof. Hans Meyerhoff represented the opposition and condemned American policy toward the war.

Bottom left image: Some 600 students at Meyerhoff Park are urged to oppose the draft during a gathering as part of a National Day of Resistance on Nov. 14, 1968. Hyde Park was relocated in 1964 next to Kerckhoff Hall after its original site by Janss Steps was thought to inhibit the flow of student participation.

Bottom right image: Prof. Hans Meyerhoff ’36, M.A.’38, Ph.D.’42, known for his philosophical teachings and dedication to his students, taught in the philosophy department until his sudden death in a car accident in November 1965. Hans Meyerhoff Park was named by the students in his memory.