On Dec. 10, 1923, the University of California Board of Regents approved a senior year of curriculum — to start the following September — at the Southern Branch (as UCLA was called then), offering students the opportunity of obtaining a Bachelor of Arts degree for the first time.

In his annual report for 1923, UCLA Provost Ernest Carroll Moore alluded to the struggle over the development of the Southern Branch: 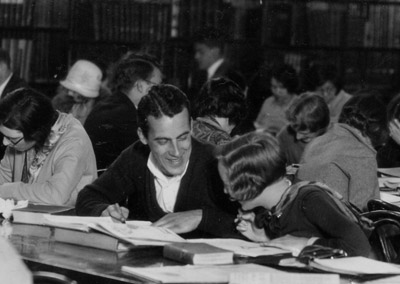 “We are trying to discover whether or not a university can conduct its work in two localities [Berkeley and Los Angeles]. The experiment is significant, for, as the nation grows and the states increase in population, it is inevitable that the State University must either transform itself into a statewide system of higher education, under a single Board of Regents, or become one of several competing state colleges.”

The Southern Branch, or “twig” as some called it, was now a full-fledged, four-year university. And there was no going back.

Top image: In 1923, the University of California Board of Regents approved a fourth-year curriculum for the Southern Branch.

Bottom image: Students studying in the library of the Vermont Avenue campus.