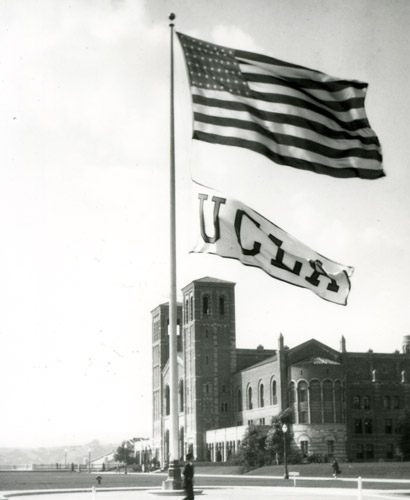 Waving the Blue and Gold

The banner, which for years was flown below the American flag following athletic victories, was an impressive gift. The 12- by 31-foot flag read “UCLA” spelled out in blue and gold across a massive white field.

“This victory flag is but one of the bonds between the university and the Rotary club,” Coe told the assembly of 200 students and guests, as reported in the Daily Bruin. “The university and the club are working hand in hand and will continue this relationship that is so beneficial to both.”

The ceremony included yells led by Ralph Green ’31, the singing of “Hail Blue and Gold” and a luncheon for selected guests, including former Daily Bruin editor Carl Schaefer ’31. The idea for the flag was Schaefer’s, and the gift was the result of an editorial campaign waged in The Bruin during fall semester 1930. 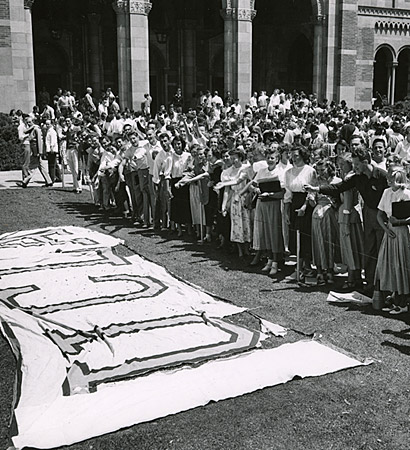 This UCLA victory flag was used for the next 18 years, until the torn and weather-beaten banner finally was retired and replaced with a flag purchased through contributions from alumni, students and friends of UCLA.

Top image: For years, the victory flag was flown below the American flag on UCLA’s main quad following athletic victories.

Bottom image:In efforts to raise funds for a new victory flag, the soon to be retired flag was outspread on the quad and students made their contributions by tossing coins onto the worn banner.