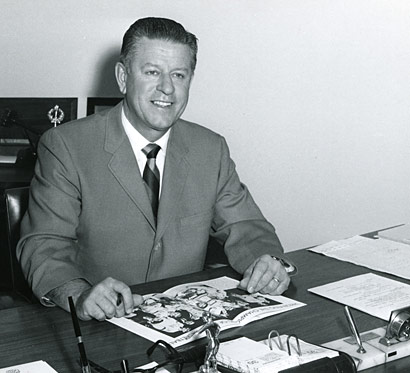 A League of His Own

In the early 1960s, with the UCLA athletics budget running in the red, Chancellor Franklin D. Murphy looked to J.D. Morgan ’41, an insider with business acumen, to oversee and stabilize the troubled program.

As UCLA’s new director of intercollegiate athletics, Morgan – previously the associate university business manager and men’s tennis coach – would soon revitalize the sports program, catapult Bruin teams into the national spotlight, and ultimately redefine UCLA athletics as a model looked to by universities across the country.

On Feb. 8, 1963, when Murphy announced his selection of Morgan to succeed the retiring Wilbur Johns ’25, restoring financial stability to the program was at the forefront of his mind. Murphy’s two other priorities were to bring competition back to the UCLA campus and to expand the minor sports, thus encouraging greater student participation.

“We needed a competent business person who also knew something about athletics and [had an] abiding interest in sports,” Murphy would later reflect. 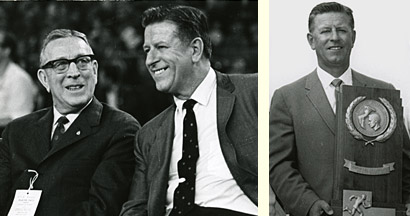 As associate business manager, Morgan was instrumental in arranging the financing for several major campus building projects, including Ackerman Student Union and the four high-rise residence halls. At the time of his appointment, plans for an on-campus indoor sports arena were moving forward. During his 16-year tenure, Morgan would not only oversee the completion of Pauley Pavilion, but also of Drake Stadium, Spaulding Field and a boathouse for crew in Marina del Rey.

Under Morgan’s direction, UCLA won an unprecedented 30 NCAA championships – 10 in basketball, seven in volleyball, six in tennis, four in track and field, and three in water polo – more than any other university during that same period. His main objectives for the program included rekindling Bruin “family” support, providing greater assistance for the coaching staff, and fostering a strong and balanced recruiting program.

Over the years some found him difficult, even arrogant. He was known to engage in battles with alumni, the press and referees, oftentimes vilifying the officials as he sat on the Bruin basketball bench during road games. These outbursts were so frequent that in an effort to limit his public displays, rival Pac-8 basketball coaches came together and voted to ban athletic directors from the team bench.

Morgan’s success was fueled by his intense competitive nature and fierce Bruin loyalty. A career Bruin, Morgan came to UCLA in the late 1930s and was a four-year letterman on the men’s tennis team, serving as team captain in 1941. Following graduation from the UCLA School of Business Administration, he commanded a Navy torpedo boat in the South Pacific during World War II before returning to his alma mater in 1946 to accept a position in UCLA’s accounting office and simultaneously serve as assistant tennis coach under William C. Ackerman ’24.

Following Ackerman’s retirement in 1949, Morgan was anointed head coach of the men’s tennis team and went on to mentor Bruin tennis legends Arthur Ashe ’66 and Charles Pasarell, among others. He guided his teams to six NCAA championship titles, and continued coaching after taking on the directorship, stepping down from coaching in 1966 to focus full-time on athletic director duties.

In 1979, after 33 years at UCLA, Morgan was forced to announce his retirement due to rapidly failing health. He continued to serve as a consultant to the athletic department until his death in December 1980.

At the time of his retirement, when asked by the Herald Examiner what UCLA would miss most about him, he replied: “They’re going to miss my style.”

Top image: J.D. Morgan ’41 established a broad-based athletic program during his 16 years as UCLA’s director of athletics, leading the Bruins to 30 NCAA championship titles. The J.D. Morgan Center – the current home of UCLA intercollegiate athletics – was formally dedicated in his honor in 1984.

Bottom left image: Coach John Wooden and J.D. Morgan enjoy a moment on the sidelines. During his tenure, Morgan would regularly sit on the Bruin bench and watch as UCLA dominated college hoops. Wooden, who had coached 15 previous Bruin teams, won the first of his 10 NCAA championships during Morgan’s first year as chief of athletics.