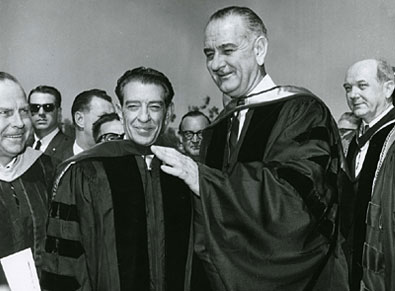 On Feb. 21, 1964, U.S. Marine helicopters bearing President Lyndon B. Johnson and Mexican President Adolfo Lopez Mateos landed on the athletic field, while an audience of 34,000, sitting in a temporary stadium constructed nearby, eagerly awaited them.

In the background, the “Big C,” normally blue in color, was painted a more patriotic red, white and blue, while Sproul Hall was draped in American colors on one side and the green, white and red colors of the Mexican flag on the other. In the center, a giant greeting: “UCLA Welcomes Presidents.” 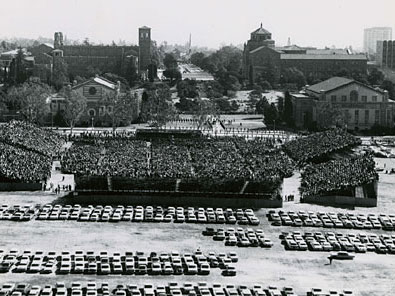 Johnson and Lopez Mateos, in Southern California to discuss a wide array of policy issues, stopped at UCLA to be keynote speakers at the 96th Charter Day ceremony, an anniversary celebration of the University of California’s founding in 1868. At the end of the ceremony, both heads of state were awarded honorary doctorates of law by UC President Clark Kerr.

Johnson, the first American president to speak at UCLA while in office, reaffirmed the solidarity between the United States and Mexico, but spoke primarily of the “dangers of today” – confirming foreign-policy aims in Vietnam, Cuba, Panama and Cyprus.

Johnson concluded his remarks by saying: “Let us, with brave hearts and with cool heads, advance with the task of building the citadels of peace, in a world set free from fear.” The speech, billed by the White House as a major foreign-policy address, aired on national TV and received international press coverage.

Lopez Mateos, whose Spanish message was translated, emphasized the role of the university and its members in the world-at-large. “Knowledge and freedom cannot be kept apart,” the Mexican president said. University students have the power to make a difference in society, Lopez Mateos continued, noting that “from these classrooms will go forward many young people with talent and dedication, who will apply their best efforts to contribute to the study of human relations and, especially, to the operation of law as the basis for order, peace, progress and fraternity.”

Bottom image: An audience of 34,000 crammed into the stadium – built just for the day – to hear the presidents speak.