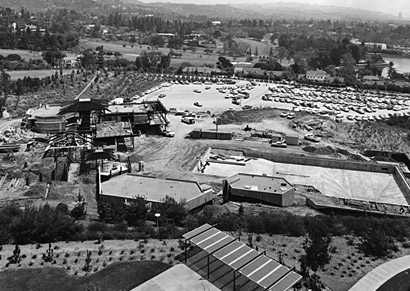 The Sunset Canyon Recreation Center made its debut on Feb. 7, 1966. Designed as a space where the burgeoning university community could find sanctuary from the pressures of campus life, the facilities on the nine-acre property at the northwest end of UCLA included swimming pools, a picnic area, an outdoor amphitheater, and rooms for dances and art exhibitions.

Within its first year, the demand for use of the center proved to be greater than could be accommodated, and forgotten was the project’s inauspicious conception.

After announcement of the plan in 1962, a campus poll indicated that students resented the idea of constructing the facility due to the perception that the administration would use funds taken from a student fee increase without their consultation. They argued that the funds would be better applied to more primary needs like married students’ housing and increased parking.

In response, Associate Dean of Students Norman P. Miller ’39, who as campus recreation coordinator championed the project, cleared up these misconceptions in a statement outlining university goals for the recreation area, including its intended contribution “to educational objectives through creative uses of leisure time on campus and to reduce the anonymity and impersonal atmosphere of a large urban university.” 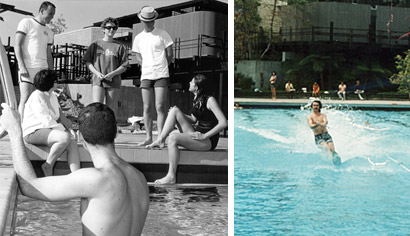 Shortly after the center’s opening, the Los Angeles Times highlighted the unique nature of the space on a university campus. The designers focused on creating a space that would be “non-rectangular, defying modules, minus the defined spaces” of a student union. “The emphasis was on nonemphasis, to make something people could shape to their own needs.”

“At UCLA, as elsewhere, we tend to place a higher value on disciplined leisure (which is more like work and hence less suspicious) than spontaneous sport,” the story continued. “If the university students of now are going to be at the ramparts of tomorrow, then their capacity for recreation is worth watching.”

A letter to the editor of the Daily Bruin perhaps best summed up the students’ ultimate thinking: “When someone orders you to have fun, you should do it.”

Top image: The property that would be home to the Sunset Canyon Recreation Center was deeded to the university by the Bel-Air Association, with restrictions that precluded its use for the construction of large buildings such as residence halls, classrooms or parking structures.

Bottom left image: Students overwhelmingly took to the pool seeking sanctuary from the pressures of campus life.
Bottom right image: Shortly after its opening, the pool became a practice space for the UCLA Boat and Water Skiing Club. Early on, like a one-sided tug-of-war, students pulled skiers at the end of a 75-foot rope to practice getting up on skis. A winch was later installed to automate this process.