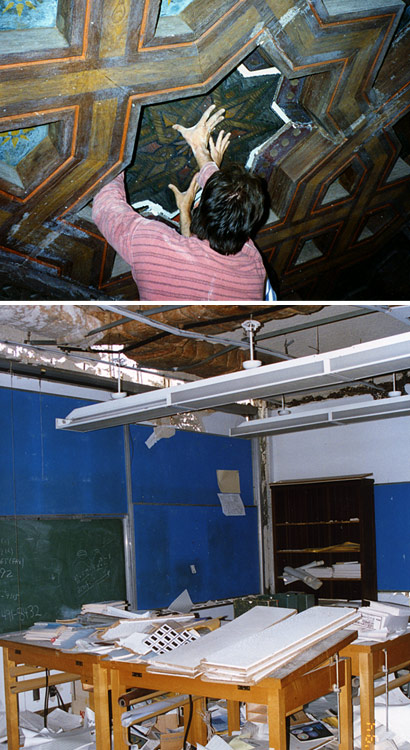 UCLA students anticipating a long holiday sleep-in were rudely awakened at 4:31 a.m. on Jan. 17, 1994, by a violent earthquake. Centered approximately 17 miles north of Westwood in the San Fernando Valley, the 6.7 Northridge earthquake jolted campus for 30 seconds, knocking out power, unnerving students, and damaging some of UCLA’s most beloved landmarks.

Kerckhoff Hall and Royce Hall each sustained significant structural damage. The four spires atop Kerckhoff rotated six inches during the quake and had to be removed by cranes. Dramatic cracks fractured the familiar brickwork on both of Royce Hall’s towers, and the building was closed and fenced off to avoid injuries from possible falling bricks.

Like many buildings on campus Dykstra Hall suffered cracked ceilings, buckled doorways and broken windows. After evacuating and spending an hour outside, residents received the all clear to return to their rooms, where some talked through their jitters during the many aftershocks while others were content to go back to sleep.

Things at the UCLA Medical Center were more hectic. The facility had sustained damage from the shaking as well as from chemical spills, a problem that plagued several south campus structures. While campus residents remained safe, the earthquake had caused 57 deaths and hundreds of injuries elsewhere. The skeletal holiday staff in the emergency room found themselves with an influx of patients with earthquake-related injuries, ranging from lacerations and stress-related conditions to at least one victim reportedly injured in a looting attempt. Additional staff members were called in to help meet the demands for medical attention.

At the end of the day, UCLA campus architect Charles Oakley had reason to be optimistic. “From the construction site point of view, we did much better than my fears at 4:30 this morning,” he told the Daily Bruin. “We were far from untouched, but it was nothing cataclysmic.”

At the time of the Northridge quake, UCLA was performing seismic reinforcements as part of a two-decade program to make 30 campus buildings more quake-resistant. The quake caused UCLA to accelerate the program, and many structures such as Royce Hall remained closed for months – or even years – for seismic retrofitting and repairs. During that time, students learned to make their way to class through mazes of chain link fence and plywood that surrounded the ongoing construction. The program is credited with saving and preserving some of UCLA’s most cherished icons.

Top image: Powell Library underwent considerable seismic renovations for months to come as a result of the damage sustained from the Northridge temblor. Workers had to replace tiles in the rotunda ceiling that had come loose during the shaking.

Bottom image: Many south campus buildings suffered extensive damage. Due to concerns about hazardous chemical spills, all undergraduate classes were canceled after many university classrooms were deemed unsafe for re-entry.