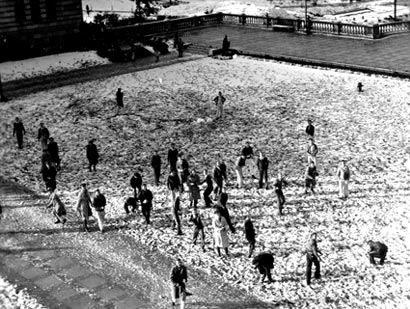 One of the most beautiful and rare mornings to ever befall UCLA occurred Jan. 15, 1932, as the campus was unexpectedly covered in a wintry blanket of snow.

It soon became clear that instead of the usual scholarly activities, the order of the day was snowman making and a pandemonium of snowball fighting. Some professors, joining in the diversion, officially dismissed classes. Those professors who tried to charge through the barrage to maintain a semblance of order, found that “personalities were not respected,” according to the Daily Bruin. 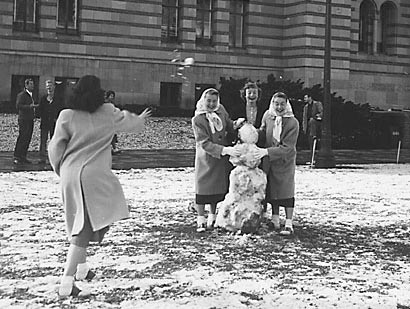 The playful mayhem was quickly met by a police officer. But as he reached Royce Hall, he was himself deluged with snowballs from all sides, including those thrown from an overhead balcony.

The administration was understanding of the exuberant spirits, however: “Let them have their fun,” The Bruin quoted UCLA leaders as saying. This, even after rumors that Ernest Carroll Moore, UCLA’s chief executive, was hit by a snowball — a claim denied by his office.

For three hours, “only the brave ventured out of buildings into the war zone,” The Bruin wrote. Then, as suddenly as it appeared, the snow vanished — melting by 11 a.m., under the bright sun.

As UCLA returned to its normal state, evidence of the morning’s events remained in a few reported black eyes and other minor injuries, a damaged lamp post, a shattered chandelier and 14 broken windows — some of which were reportedly attributed to professors’ inexpert aim. A good sport, Dean of Men Earl J. Miller offered to pay for damages.

In the end, “all was forgiven,” wrote the alumni magazine, “for snow on the UCLA campus is a rare experience indeed.”