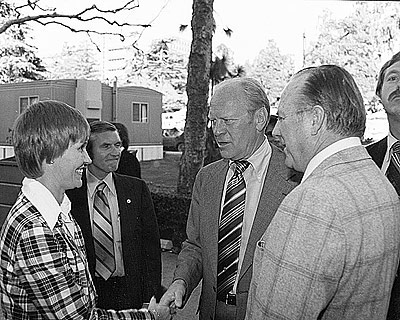 Women Get in the Game

In 1974, anticipating the enforcement of federal regulations — popularly known as Title IX — which would prohibit sex discrimination in university athletics, Chancellor Charles E. Young M.A. ’57, Ph.D. ’60 announced the establishment of the Department of Women’s Intercollegiate Sports. The department introduced 10 varsity women’s teams and one coed squad (badminton) in its initial year.

With the move, UCLA became one of a few universities that elevated women’s programs to full status. Caspar Weinberger, secretary of the U.S. Department of Health, Education and Welfare — the government agency responsible for Title IX — cited UCLA’s efforts as a model for the country to follow.

A year later, Judith Holland, appointed the department’s first full-time athletic director, was busy establishing a foundation for the program. Holland began with a meager $283,000 budget. She devoted the majority of those funds to scholarships, which meant she could only hire a part-time coaching staff. “I still recruited the best coaches but sold them on the ‘blue and gold’ and what would happen over time,” she says.

During Holland’s first year, UCLA recruited 188 women, with Holland doing much of the recruiting herself. With an eye to the department’s future, Holland implemented a five-year plan to help bolster the program’s available funding, allow for full-time coaches, provide more aid for student-athletes, and increase travel funds.

While the department was started as a separate unit, the intention was always to eventually integrate it under the Department of Intercollegiate Athletics. In 1981, that finally happened. Also that year, the NCAA first began to provide championships for women’s athletics, and Holland switched UCLA’s teams from the Association for Intercollegiate Athletics for Women to the NCAA.

“The first and foremost goal was to be the best women’s collegiate program in the nation,” Holland recalls. “I believe that we did accomplish this goal.”

In 2007, a victory by the women’s water polo team allowed UCLA to become the first university to reach 100 NCAA national championships.