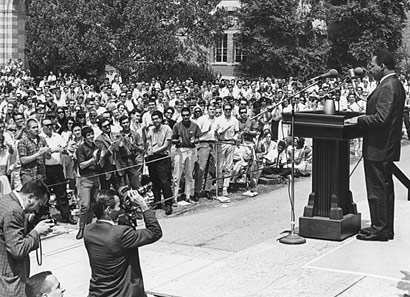 More than 4,500 students and faculty gathered near Janss Steps on April 27, 1965 to hear the Rev. Martin Luther King Jr. speak about racial injustice and the evils of segregation.

Under heavy guard and the gaze of television cameras, the 1964 Nobel Peace Prize recipient addressed the UCLA community and the nation on the need for racial integration, increased educational opportunity and guaranteed voting rights. The hour-long speech came just one month after his successful march from Selma to the Alabama capital of Montgomery, and outlined both the accomplishments and setbacks of the civil rights movement. King also appealed to students, specifically recruiting them for a summer program that would work to double the number of blacks registered to vote in the South.

The crowd – which filled the quad between the men’s and women’s gyms and stretched up into the hills along Janss Steps – remained intent as King spoke, interrupting only with an occasional thundering ovation. 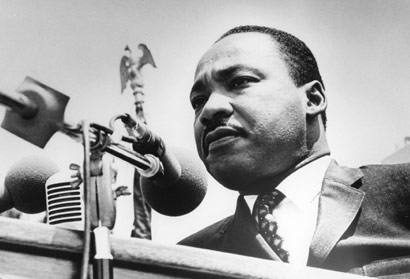 King warned that while progress had been made there was no time for complacency.

“Old Man Segregation is on his deathbed,” King said. “But history has proven that social systems have a great last-minute breathing power, and the guardians of the status quo are always on hand with their oxygen tents to keep the old order alive.”

He continued: “If democracy is to live, segregation must die.”

Top image: King was invited to campus as part of ASUCLA's Speakers Program, which hosted notable social activists and political figures of the time. Students later presented him with $700 they had collected for his work on voter registration efforts in the South.

Bottom image: In his hour-long speech, King encouraged the use of “massive action programs” to end the segregation afflicting the nation.